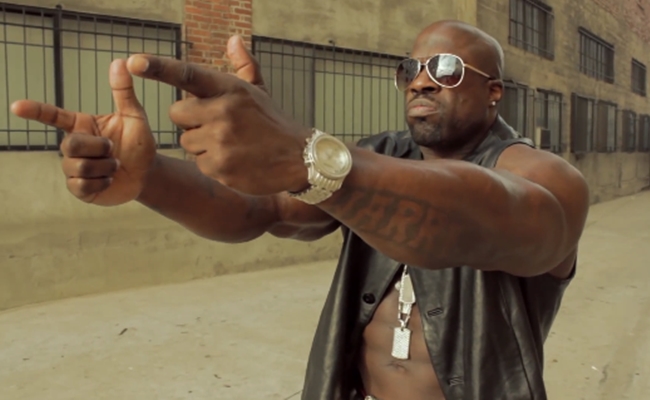 It’s been a long time since Muscles Glasses appeared in an Epic Meal Time video, but his actions remain legendary to this day. With his burly arms, tinted Aviators, and inhuman ability to shovel food down his throat, Muscles Glasses helped sell t-shirts and grow Epic Meal Time  into the YouTube juggernaut it is today.

Muscles Glasses hasn’t appeared in an EMT episode for a long time, but the mystique behind his character has now returned in The Legend of Muscles Glasses, a new web series from EMT sauce boss Harley Morenstein.

Here’s the story, as explained by Morenstein in a recent YouTube video: Muscles Glasses was never actually an organic member of the EMT crew. Instead, he was a character created by Morenstein and Tyler Lemco, who still run the Muscles Glasses Twitter feed. Alex Perrault, who portrayed Muscles Glasses on screen, was actually a compensated actor, though he left the show in 2013 after a reported feud with Morenstein. Perrault has since moved on to helm SportsManias, a sports-themed YouTube channel co-created by Lemco.

The Muscles Glasses character, however, still belongs to Morenstein, and that brings us to The Legend of Muscles Glasses, a web series hosted on the official Muscles Glasses channel. It follows the journey of the character’s magical Aviators through time and space. In the first episode, they arrive in a 70s blaxploitation parody, where blood is promptly spilled.

In a Tumblr post, Morenstein explained that The Legend of Muscles Glasses draws inspiration from Terminator, the ‘travelling powers’ conceit of Green Lantern, and the action-packed creations of YouTube channels like FreddieW and Corridor Digital. In order to best emulate the work of his YouTube contemporaries, Morenstein is working with Mars Rising, a studio that specializes in action packed YouTube fan films.

Let’s be honest: No one can ever replace Perrault as the true master of the Muscles Glasses persona, but since he has indeed moved on, I suppose an assortment of other Aviator-clad, chiseled badasses will do the trick just fine.