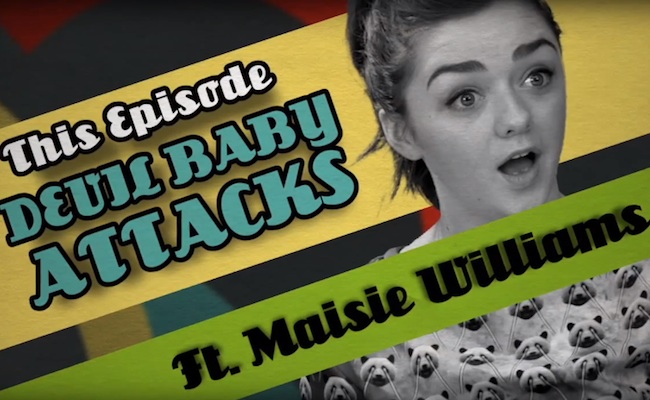 The Fine Bros. have over seven million YouTube subscribers. Arya Stark is one of them.

Maisie Williams, the young actor who plays the youngest daughter of Eddard and Catelyn Stark on HBO’s Game of Thrones, is a big fan of the online video offerings of Benny and Rafi Fine, especially the fraternal pair’s React series. The brothers found out about Williams’ affinity for the program over social media, reached out, reminded Williams of the customary saying in Essos of Valar Dohaeris, and the 16-year-old swung by the Fine brother’s studios in LA to film two episodes of Teens React before heading off to find a man without a face. (Editor’s Not: Sorry / not sorry for all the GoT references.)

In the installment, Williams and a handful of other teenagers react and respond to the ingenious prank marketing campaign for the horror flick Devil’s Due. It’s not at all dissimilar to many other episodes of the Fine Bros’ Kids, Teen, Elders, and/or YouTubers React series. Participants of a selected demographic all watch a timely and/or classic online video and then answer a series of questions. It’s like a focus group for internet ephemera. The only difference with this episode is it features someone who viewers may recognize from somewhere outside the confines of React.

The guest star bodes well for the Fine brothers. Williams seems to have had an absolute blast being a part of the program, which could encourage other individuals from traditional forms of entertainment to seek out Benny and Rafi so they can be a part of the show, too.