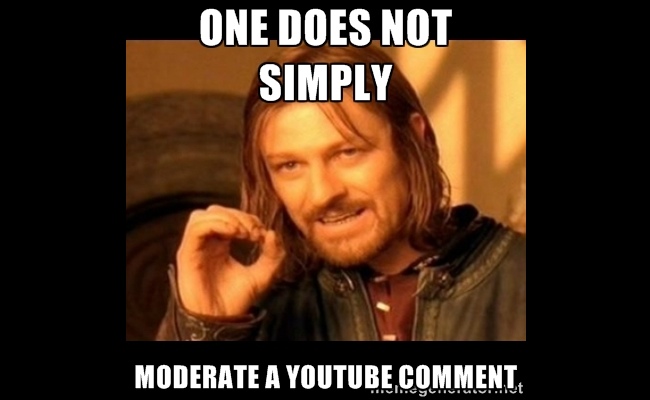 YouTube recently overhauled it’s commenting system. The new system, powered by Google+, had its fair share of initial hiccups. The integration with Google’s relatively new and ubiquitous social network was supposed to make verifying a channel’s Top Fans a breeze and allow for a more relevant, less spammy, and easily navigable commenting experience. Things didn’t go exactly as planned (though ASCII art experienced a brief renaissance). But after some tweaks, the 230,319+ YouTubers who were disappointed with the rollout seem to have simmered down.

Now, YouTube’s released another improvement to its comments that will be sure to calm any who are still aggravated with the new iteration. Any YouTube creator can now click over to YouTube.com/Comments and be presented with all the comments on his or her channel aggregated into one central location.

“You can easily remove comments, flag comments for spam or abuse, give a thumbs up, or click over to the video watch page and reply,” wrote YouTube Engineer Patrick Doyle on the YouTube Creator Blog. “Quickly toggle between comments that are published on the channel, comments that are pending channel manager approval, or comments that have been marked as spam.”

It’s a great new feature (if long overdue) that’s sure to have a positive effect on a channel’s interactivity with its fans, which, if used effectively, should lead to a noticeable increase in subscribers and views.