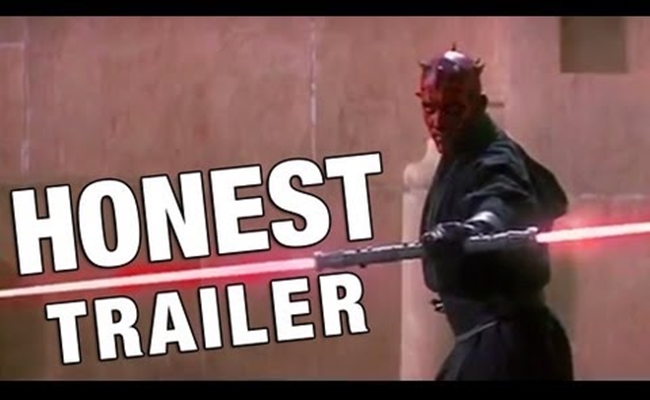 Defy Media is on a roll. Shortly after its AWEme channel surpassed one million subscribers, its film-oriented Screen Junkies channel reached that mark as well. Just as AWEme can attribute most of its success to Man at Arms, most of the traffic on Screen Junkies is driven by a single series, Honest Trailers. We returned Defy Media Director of Programming Andy Signore to our YouTube Millionaires spotlight to talk about the Screen Junkies oeuvre.

Tubefilter: How does it feel to see Screen Junkies pass one million subscribers?

Andy Signore: It feels great! We have so much fun making theses shows, so to know that the audience is connecting to it all and having enough fun with us to keep coming back and subscribe is amazing. I really have to thank some of our amazing team: Editor/Director Dan Murrell, Writer Spencer Gilbert, our host Hal Rudnick and our amazing epic voice Jon Bailey. I know we’re all extremely grateful to the fans for helping us cross this milestone.

TF: How did Honest Trailers get started? Is there a single film that inspired it?

AS: It started in February, 2012 when Star Wars Episode 1: The Phantom Menace was being re-released in 3D. We were so confused as to why they would re-release such a disappointing film in crappy 3D post-conversio But then we watched the trailer for and it showcased two minutes of all the coolest parts of the film: Darth Maul, the “Duel of the Fates” theme, and it almost tricked us into wanting to see it again.

So that’s when the idea of making an actual Honest Trailer was born. Marketing the film for the way it really is.

TF: What percentage of the movies featured in Honest Trailers do the series’ creators actually dislike? Is it hard to make an honest trailer about a great movie?

AS: I’d say its pretty 50/50. We’ve started doing more popular movies, as that’s what the audience requests most often – so classics like Jurassic Park or The Matrix are surely tougher than some more bloated, disappointing blockbusters like Man of Steel.

Making an Honest Trailer for a great movie is definitely harder because the movie’s problems are harder to find. So we try our best to tackle it from a broad perspective, asking things like: How did this movie change the overall landscape, what do people really remember about it, what are things they probably never noticed?

TF: Would the Honest Trailers team rather watch a good movie with a few flaws or a terrible blockbuster ripe for parody?

AS: Definitely a terrible blockbuster. After Earth is a great example of that. I originally pitched that as a bonus episode where, because the movie is so ridiculous, our trailer voice quits midway through the video. But we ended up having so much fun tearing that movie apart we had him stay til pretty much the end! We just had to take that movie down. Right now we’re deep into finalizing our Honest Trailer for Home Alone, and man that movie really holds up. It took us a much longer time to verbalize the proper honest criticism of that film.

(Ed. note: The Home Alone episode has since been released.)

TF: Is there a movie you would like to do an Honest Trailer for but haven’t gotten enough submissions to make it worth your while?

AS: If we all really wanted to do one, we’d probably figure out a way to do it. Amazingly enough, any movie we could think of has likely been requested by at least one or two fans. We learned that when we chose the long-forgotten Superman IV: The Quest for Peace, which two fans had genuinely asked for.

TF: How much of your inbox consists of hate mail from angry fanboys? Any notable examples?

AS: Our inbox is surprisingly positive these days. I hate to admit that because I’m probably jinxing ourselves…But honestly, the angry fanboys tend to only leave angry dismissive comments. Which is great because then our fans will quickly reply, and that back and fourth creates lots more comments, which obviously helps the video perform even better!

TF: Many popular film channels on YouTube (Screen Junkies, CinemaSins, HISHE, Nostalgia Critic, etc.) feature a lot of parody and negative criticism of bad films. Why do you think people are so interested in seeing reviews of bad movies?

AS: Well we all love movies, and we get excited for big movies. So when a big tent pole film ends up being a big steaming turd – it upsets a lot of people. It’s something we can all unite against and laugh at.

All those you listed are really strong channels and I don’t think any of them just “review bad movies.” I can’t speak for them, but I know we try really hard to not just become nit-picky and sarcastic. With Honest Trailers, the number one rule in our writer’s room is always “is that Honest?” Of course, it is a comedy show, so we’ll go off on a tangent or be silly for the sake of being silly. But we really try to keep our overall criticism honest. And I think that’s why people have connected with us.

TF: How do you make The ScreenJunkies Show accessible for both casual moviegoers and serious film buffs?

AS: We try to focus on film/TV topics that we think our broader audience actually cares about. Obviously not everyone cares about both Game of Thrones or Die Hard equally – but both properties have hard-core fan bases, and I think both bases respect one another. The film/TV crowd is a passionate and loyal bunch, so we do our best to take each show topic seriously and have a good time discussing it.

Our host, Hal Rudnick, is a crucial part of the formula. He’s such a comedy pro. He’s really able to jump us from topic to topic, while keeping that same passionate, snarky tone that our fans have to come to love.

TF: Are there any other series in the works? Or any interesting developments we should look out for?

AS: We are in the midst of developing some new shows and we’re looking to “back-door pilot” some segments inside The Screen Junkies Show itself. So in the coming year, we’ll definitely be bringing in some new segments, panelists, and correspondents. If the ideas connect well they could graduate to their own weekly or monthly show.