Can The New York Television Festival Get Past The Pilot? 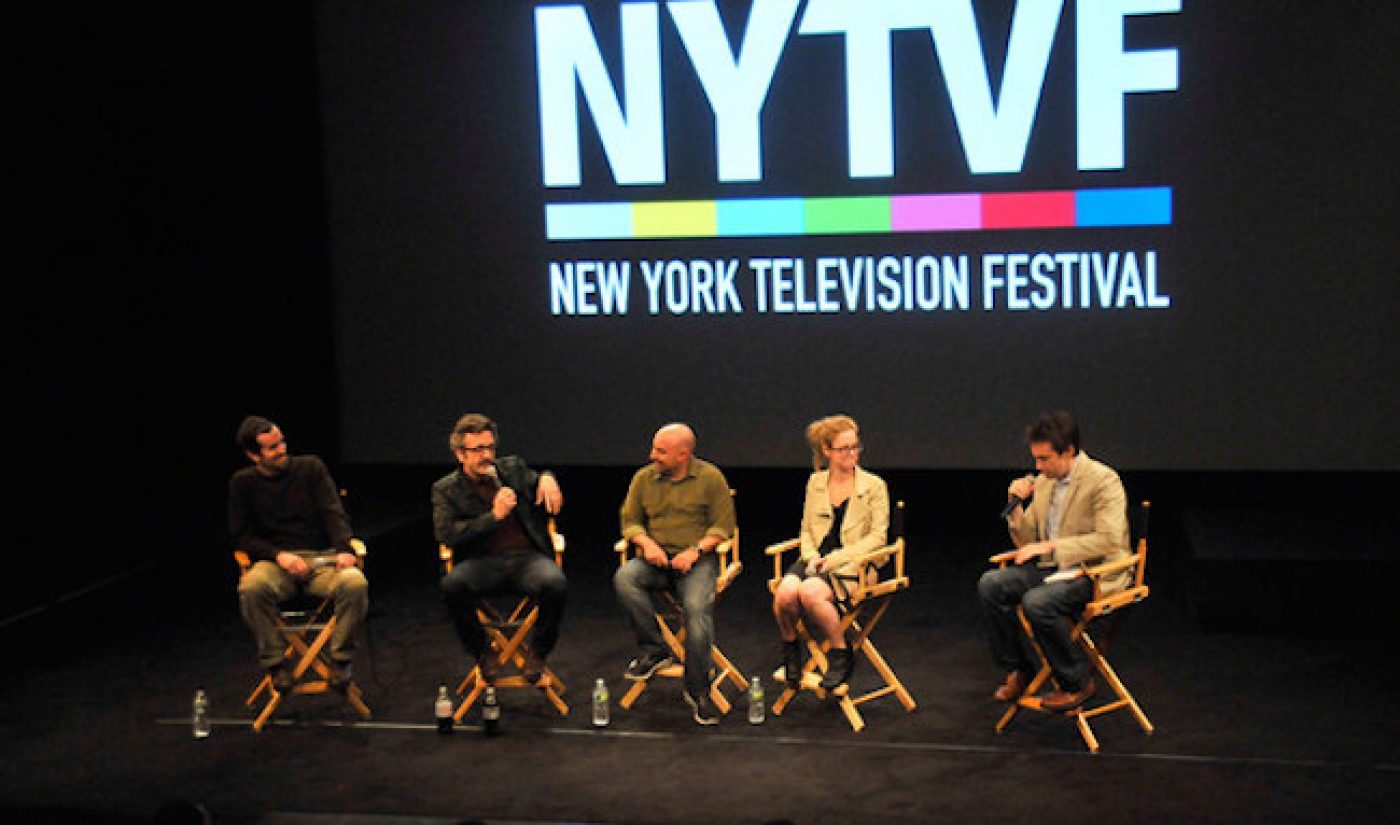 If you’re an indie TV creator, you should know about the New York Television Festival. There are a lot of festivals for independent television, most of them for web series like LAWeb Fest, ITV Fest, and Holly Web Fest. But producers and executives widely consider NYTVF the best in quality.

That reputation probably stems from the fact NYTVF every year brings an impressive roster of development partners, including Fox, Comedy Central, NBC, IFC, MTV, BET, and more. Most of those networks offer deals to producers whose shows they like. The festival says 30 “guaranteed development opportunities” will come out from 18 partners for a total of $250,000 (which, if you do the math, is not a ton of cash, but enough to get a project off the ground).  This year NYTVF received 3,000 submissions for 201 slots in its independent pilot competition, which screened last week and whose winners were announced on Saturday. In addition, digital networks like My Damn Channel take meetings with producers and are increasingly offering distribution to promising new talent.

Now in its ninth year, NYTVF is an achievement. It has showcased a number of great creators, many of whom, like Michael Cyril Creighton and Morgan Evans, I’ve written about before.

If there’s a flaw in the festival’s plan it’s clear once you attend the screenings. Piloting is tough. Most network pilots, even with months of development, focus-grouping and reworking, are not good. The pilots at NYTVF are almost all proficient: good acting and technical production value are in evidence at every screening.

But a television pilot is not a short film. Pilots have to make the viewer want to watch the second episode. In focusing on pilots, NYTVF misses the many web series online who might not have the highest production value, but who, because of good writing or well-honed personality, have amassed fan bases large and small. This is probably why NYTVF hasn’t helped produce a hit TV show – last year’s unscripted champ Bunk was sadly canceled by IFC. The scripted web shows getting bigger development deals, like Broad City, High Maintenance and top YouTubers, have done it without festivals. Indie creators need distribution but are having a hard time because they’re doing everything a network does independent of networks, who prefer to be involved in the development process.  The festival theme this year was “Television Reprogrammed,” but maybe next year’s should be “Television Re-developed.” If independent television has shown us anything, it’s how wasteful TV development is: networks develop without fans so they can collect revenue from advertisers upfront.

Still, every year NYTVF shows some promising pilots and offers artists useful advice on how to get past the first episode. Here are a few:

Disclosure: I prefer dramas. This makes me boring. Writers can do a lot more in comedy, where laughs make politics more palatable – Parks and Recreation probably does a better job satirizing contemporary culture and politics than The Good Wife.

NYTVF is heavy on comedy. There are 12, hourlong blocks of comedy programs compared to drama’s three. Perhaps because they take fewer dramas, the ones they show tend to be quite good. Dramas need higher production value. They require more focus from viewers.

By far the breakout drama this year was Johnny Kenton‘s Hereafter, a British 36-minute pilot released by the Multiverse network about superhuman “guardians” who are employed and trained by the state. The story focuses on the first “natural born” to enter their ranks. It’s a hero’s story about overcoming fear and demons. It was brilliantly acted, beguiling and technically proficient. The festival audience cheered excitedly during the credits. It’s a shame Syfy pulled out as development partner this year, because it’s better than most of their new offerings, though the Internet is hardly starved for quality sci-fi geek stories – after all, Machinima is one of YouTube’s most successful multichannel network.

There were other standouts. Andrew Chung‘s Millions is a coming-of-age-as-adults drama about a group of friends who’d pledged to become millionaires by 30 but are not at all close. It features a big cast of mostly great actors caught in a matrix of story lines exploring work and love. Millions has been in development for awhile, but the full version will be screened at the this month’s Vancouver Asian American Film Festival.

Solid dramas about underrepresented groups were in abundance, including: Mark Ennis‘ Red Clay, a thriller about violence surrounding an American Indian reservation in New Mexico that featured a number of great actors, several from Breaking Bad; Alain Alfaro‘s Henry, a dramedy about a charming, down-on-his-luck, Dominican-American New Yorker; and Quincy Morris‘ In Between Men, a soap about hot, successful gay New Yorkers and one of the few series in the festival with a loyal audience (and ample production budget).

Pressed for time, I did not make it to most of the many comedy screenings. What I did see was accomplished, if a touch uninspiring.

The most inspiring series I saw was, ironically, Uninspired, created by and starring Becky Yamamoto. Yamamoto plays a thirty-something New Yorker recently fired from her job and searching for purpose in friendship and love. Her boyfriend is nice, if motivated. Her friends support her but are moving on and growing up. Uninspired‘s heroine is frustratingly misguided, much like many recent sitcom heroines, from Liz Lemon to Hannah Horvath. I’m interested in seeing how she tries and fails to grow up, and the cast is solid, featuring a number of fantastic actors from Michael Creighton’s exquisitely cast Jack in a Box (in which Yamamoto appears) including Katina Carrao, Paul Thureen and Creighton himself.

There were a lot of pilots about single twenty- and thirty-somethings trying to find direction in life. If Uninspired took the 30-something crown, Re:Verse won it for 20-somethings (along with the Audience and “Best of the Fest” titles).

Re:Verse, created by UCB-er Stephen Soroka and artist Nic Rad, stars Pippa as a law school dropout who is all hope and ambition without any direction. Think Hannah but without an apartment or any noticeable talent. Star Maria Krovatin‘s easy confidence and husky voice recalls Lauren Bacall, grounding a pilot that might have devolved into sap. It’s easy to see why Re:Verse came out a champ, it’s TV-ready – except networks might fear giving it a green light for fear of being seen as jumping on the Girls train too late (alas, the consequences of TV’s perennial diversity problem).

Good web comedy excels when it teeters on the brink of sanity. Escape From Brooklyn, co-created by Sue Holloway (30 Rock) and Megan Neuringer (who co-stars in Uninspired), is a ridiculous extended punchline, the kind the Upright Citizens Brigade excels at.

Laura Grey and Jordan Klepper‘s Engaged, hardly an original idea for a series, nonetheless managed to take stock jokes about wedding preparation (picking flowers, taking your portrait, choosing your location) and blow them up in imaginative ways.

It’s also worth noting that while few of the programs featured in the festival make it to distribution on TV and other digital platforms, many of the creators of those programs do.

One of my favorite success stories of NYTVF is Matt Kirsch. The Brooklyn-based writer screened his self-starring web series Duder at the festival a few years ago. A manager saw his work, liked it, signed him up, and now he enjoys writing for the Late Show with David Letterman.

You can check out the vast majority of the pilots submitted to NYTVF on the festival’s YouTube channel, too. If you believe I missed a good one, be sure to let me know in the comments below.