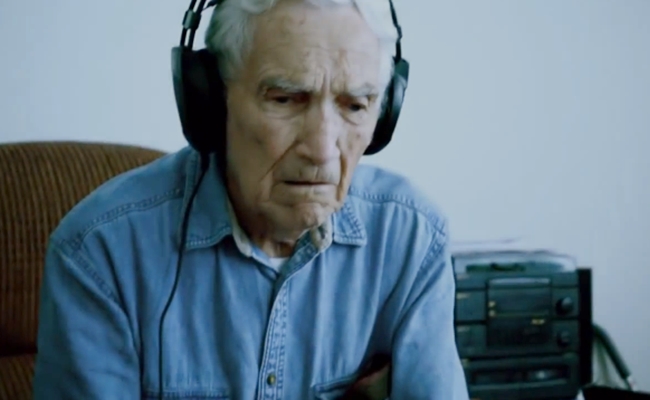 One of YouTube’s most recent viral hits is also one of the most touching videos you will ever see. Green Shoe Studios‘ ‘A Letter From Fred’, which has been viewed more than two million times since its release, chronicles the life of 96 year old Fred Stobaugh, his 73 year marriage to his deceased wife Lorraine, and the touching love song he wrote after her death.

As the video recounts, Stobaugh responded to a singer/songwriter contest by mailing Green Shoes the lyrics to ‘Oh Sweet Lorraine‘, a mournful ballad about the memories his wife has left behind. The recording studio was so touched by his story that it decided to put together a version of his song, even though it didn’t fit within the parameters of the contest.

The resulting song was uploaded to YouTube as part of a mini-doc about Stobaugh’s life. As many people have noted, the song itself is not that exciting, but Stobaugh’s reaction to it is something else. Warning: if you found yourself tearing up during the ‘Married Life’ scene in Up, you won’t fare much better here.

In addition to making Stobaugh into YouTube’s oldest star, ‘Oh Sweet Lorraine’ has earned the Peoria, IL native spots on both the Itunes and Billboard charts. The documentary is a much-needed breath of fresh air and a reminder that raw emotion and longing can have as much of an impact on the YouTube community as the next big video game. Now, if you’ll excuse me, I have to go find the person who is cutting onions in here.