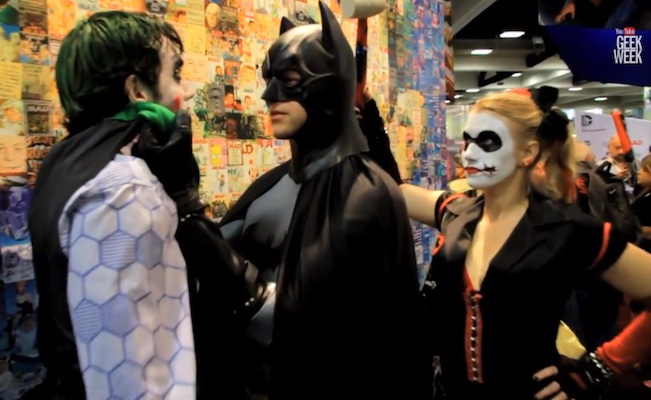 After a full week of non-stop geek fun, YouTube’s Geek Week ends with its final Fan Friday. There are plenty of nerdy fans in cyberspace, as Geek Week has proven, but there’s one particular fan subculture that stands out from the crowd. The Cosplayer.

For those not emerged in nerdom, the term cosplay is short for “costume play” and is exactly what it sounds like. Participants wear costumes and accessories to represent or roleplay a fictional character. Cosplay photography has been around since convention attendees began dressing up as their favorite characters, but it’s only recently that cosplay videos have been popping up all over the internet. This week alone we have seen cosplayers in Machinima’s epic YouTube at WAR! and Screen Team’s charming Who We Want To Be music videos. But in the search for videos that summarizes the best of cosplay culture look no further than Sneaky Zebra.

Sneaky Zebra is UK filmmaking duo Nick Acott and Gary Scullion. After covering a variety of film, comic, and gaming conventions in the UK, Sneaky Zebra crossed the pond to film at San Diego Comic Con this year. With so many cosplayers in attendance at SDCC, Sneaky Zebra created not only one epic music video released right after Comic Con, but a second cosplay video entitled I Just Want To Be a Super Hero just for Geek Week.

The video opens with the massive Legacy Effects and Stan Winston School’s robot and continues onto showcase a variety of cosplay. From famous figures Yaya Han and Ivy Doomkitty, to community favorites Captain Dad, to kids playing with lightsabers, this video has something for the geek in all of us. Also be sure to catch special cameos by Nerdist‘s Chris Hardwick and Chloe Dykstra in BioShock Infinite cosplay near the end.

When asked why they cover cosplay, Sneaky Zebra stated, “We love the cosplay community; there is so much talent, creativity, and passion from people who are making their own costumes which is why we love to film them, to show off how awesome they all look and to bring a little bit of mainstream exposure to the community.”

Nick and Gary also mentioned how they select music they feel promotes a positive image of cosplay in all their videos. And while Sneaky Zebra might not be the first cosplay videos on the market (check out Beat Down Boogie and Cosplay Fever), they are helping to bring cosplay into the spotlight.