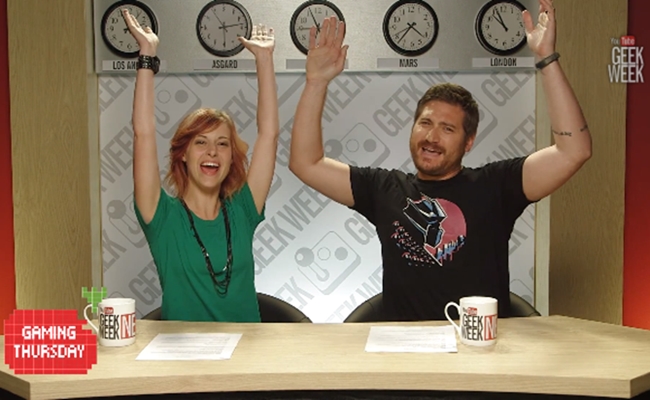 With Thursday in the books, there are now just two days left in Geek Week. After spotlighting blockbusters, international geekery, science, and superheroes, YouTube celebrated video games on Thursday, with some of the site’s top gaming creators coming together for some incredible productions.

The day’s hosts represented an alliance between two top multi-channel networks, as Dodger (of Maker Studios and the newly re-branded Polaris) teamed up with Adam Kovic (of Machinima’s Inside Gaming) to highlight some notable videos.

The most impressive video of the day came from Machinima. As expected, the network built around video games didn’t miss the opportunity to make the most of Gaming Thursday. It offered up a huge collaboration featuring 32 popular YouTubers, including SeaNanners, TheSyndicateProject, iJustine, Rooster Teeth, and Chris Hardwick. The epic video plays out the daydreams of its cast members and resembles Rewind YouTube Style in scope (but with more controllers).

Including the Machinima video, ‘video games in real life’ seemed to be a major theme on Gaming Thursday. Corridor Digital designed a real life version of Half-Life‘s gravity gun and Freddiew‘s Video Game High School found itself in the spotlight once again. The Yogscast extended this sub-theme to tabletop gaming by launching Adventurers Assemble, a new web series where a bunch of pasty nerds meet up to enter a fantasy world.

Finally, Polaris brought us the most heartwarming video of the day, in which various gamers wax poetic about the ways gaming can bring together players of disparate background. I’m sure it will make gamers feel warm and fuzzy inside for about one day; after that, they’ll go back to cursing out their opponents through their headsets.