YouTube Millionaires: Jacksfilms Now Has Over One Million ‘Biches’ 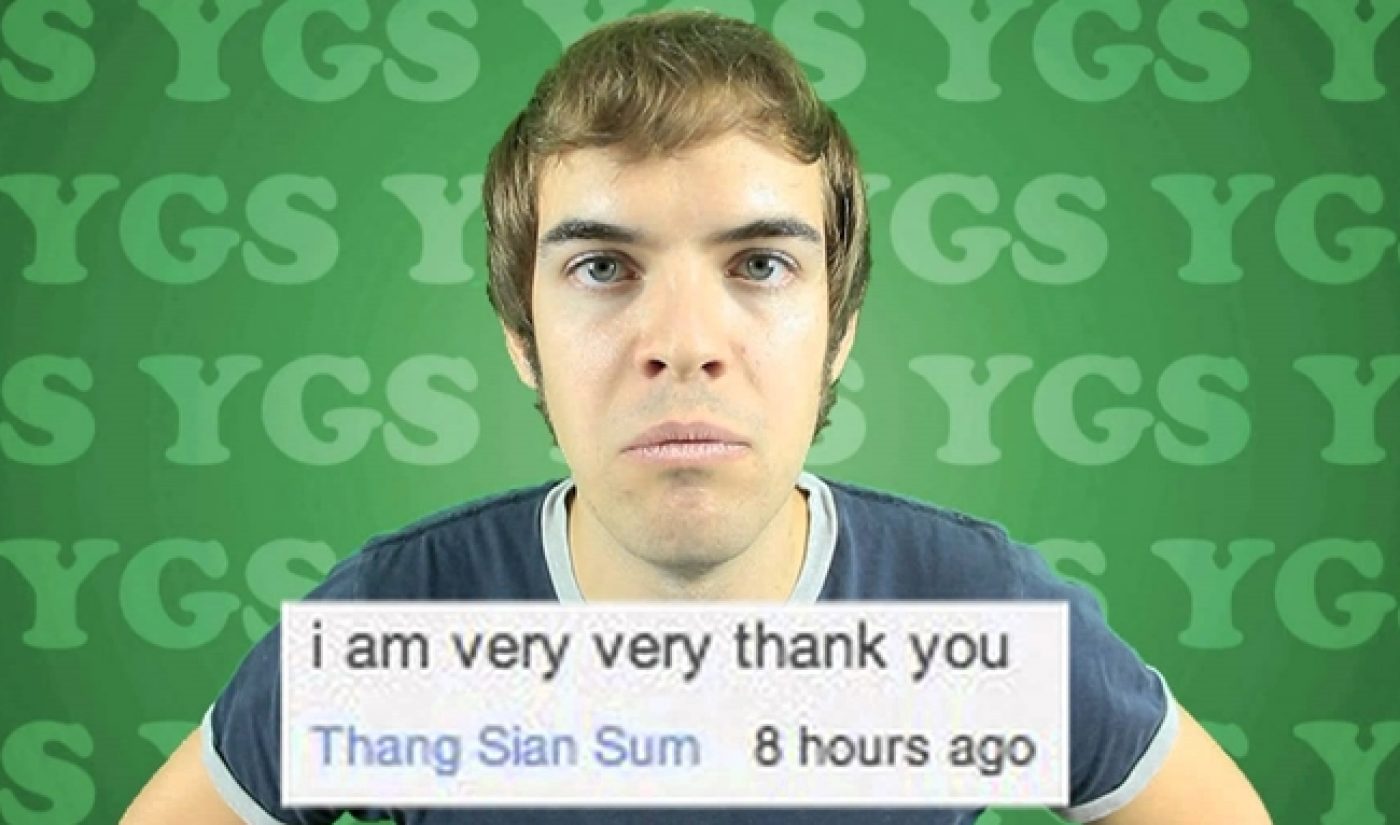 Though he has been active on YouTube for seven years, Jacksfilms (AKA Jack Douglass) first gained widespread attention in 2009 when he introduced the world to the WTF Blanket, a sharp parody of the Snuggie. Two and a half years after that, Douglass posted the first installment of Your Grammar Sucks. Fast forward to the present: YGS is now up to 54 episodes, and its popularity has helped Jacksfilms pass one million subscribers. Here’s our interview with Douglass, which we promise doesn’t have a single comma out of line.

Tubefilter: How does it feel to crack one million subscribers? What do you have to say to your biches?

Jacksfilms: Hitting the big million has been a dream of mine for years, one that I thought was a long way off. It’s surreal and incredible and a bit scary, but boy do I love it. It’s unreal how supportive my fans (biches) have been over the last 7 years. They’re the reason I’m at where I am today. I can’t thank them enough, but I’ll sure try. The best motivation for making videos now is knowing I have a million (!) people waiting on me. If that isn’t pressure to get things done, I don’t know what is!

TF: How do you decide on your infomercial parodies? Do you watch late night, local access TV in search of parody-friendly material?

JF: Infomercials were a passion of mine growing up. I don’t mean making fun of them; I mean actually watching and loving them. Like millions of others, I LOVED watching Billy Mays hawking Oxy Clean as a kid. I wanted to buy that so badly and soak a t-shirt in iodine just to see if it worked. Yea, I was a weird kid. But now I’m a weird adult!

TF: What is the worst grammar mistake you have ever encountered on YouTube?

JF: Oh boy. Picking the worst comment is like picking my favorite child. Each “Your Grammar Sucks” video has on average 40 comments, and with over 50 episodes I sometimes have to ask myself if I’ve done this comment before. I think the worst one was a caption under a cute picture of a little girl wrapped in a blanket. The caption, unfortunately, read “Raped my little sister.” Good lord.

TF: If you could, would you eliminate bad grammar forever, even if it meant you would no longer be able to do ‘Your Grammar Sucks’?

JF: No way! I have too much fun reading the worst of the worst. Even without the paying gig, it’d be a far less comical world without mocking people who can barely spell their name.

TF: Who is one person who you would like to have as a future guest on ‘Your Grammar Sucks’?

JF: Tie between Harley of Epic Meal Time and Grace of DailyGrace. I’ve never worked with Harley, and I  imagine the dialogue would be hilarious. And I’ve worked with Grace before; her improv is just fantastic. I feel like she’s one of those people who’s effortlessly witty.

TF: Is the character of Chad based on any real life bros in particular or is he pure caricature?

JF: Chad was an exaggerated version of some of my college friends who were in fraternities. I never got into frat life but enjoyed mocking it (along with everything else, apparently).

TF: You haven’t done much recently with your secondary channel. Any plans to do more vlogging in the future?

JF: Haha I hope so! Truth be told, I’m a terrible, terrible vlogger. And I don’t just mean schedule wise, I mean I’m terrible at properly doing vlogs in general. I’m awkward at holding the camera to my face and discussing whatever it is vloggers discuss. However, I AM going to try a new series on that channel that makes fun of gaming channels. My fear, though, is that viewers won’t get it. But it’s something I can crank out every day, unlike Jacksfilms videos that take a week or two. So we’ll see!

TF: When and why did you start calling your fans ‘biches’?

JF: The origin of biches can be traced back to the very first ‘Your Grammar Sucks’ video, when someone tries to call me a bitch and fails wonderfully. For a while, I was aiming to call my fans ‘Jack’s Nerds’, but thank god I found something less generic.

TF: What’s next for Jacksfilms? Any fun projects on the horizon?

JF: So, so much. As much as I enjoy making YGS, I REALLY enjoy making parodies, music videos, and sketches (PMS, if you will). That’s where I put most of my effort, and that’s where I have the most fun creatively. I have dozens of those planned, including a rap, a musical sketch, a cartoon, and so many parodies. And if I can crank out one of those every week, I’m a happy man. As I tell my fans, the best is yet to come!

On Deck (channels that will soon reach one million subs): Wafflepwn, Movieclips, VanossGaming