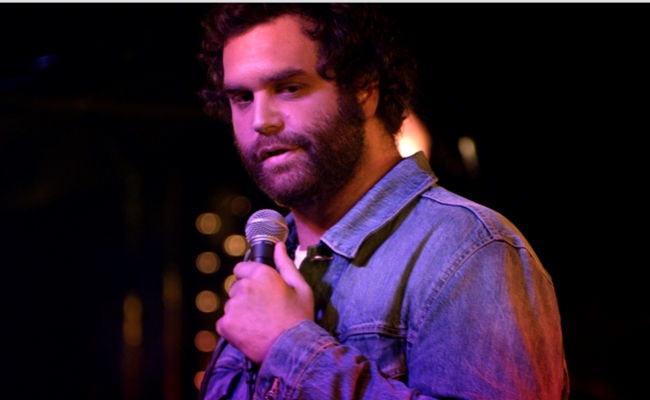 Before Epic Meal Time took off, Harley Morenstein was a humble substitute teacher. Now, his Internet fame has allowed him to try his hand at stand-up comedy. The leading man of YouTube’s #1 cooking show is one of the 12 featured comedians on Ari Shaffir‘s This Is Not Happening, a storytelling series produced by Comedy Central‘s CC Studios wing.

The premise of This Is Not Happening is a simple one: Shaffir provides a topic, and twelve comedians (Shaffir included) weave a personal tale based off of that topic. The first topic is “One Crazy Night“, and Morenstein engagingly recounts one of the sloppiest evenings he’s had since EMT hit it big.

Morenstein portrays an indestructible version of himself on his show, so it’s fascinating to hear him talk about a time when the Sauce Boss acted like a mere mortal. Also, I had no idea that a high YouTube view count is all you need to get into the most exclusive clubs. Please excuse me while I go build a subscriber base.

This Is Not Happening is one of the three shows currently featured on CC Studios, which has churned about an impressive array of content since the cable channel launched it back in January. This Is Not Happening works well because it strips away the veneer of high production values and gets at what made Comedy Central a hit in the first place: Funny people saying funny things.

Though six more comedians have yet to present their wild nights, two separate showcases have been filmed, leading me to believe that there is at least one more round of stories coming after this one. I think the second topic should be a frank discussion of the geopolitical struggles in the Middle East.