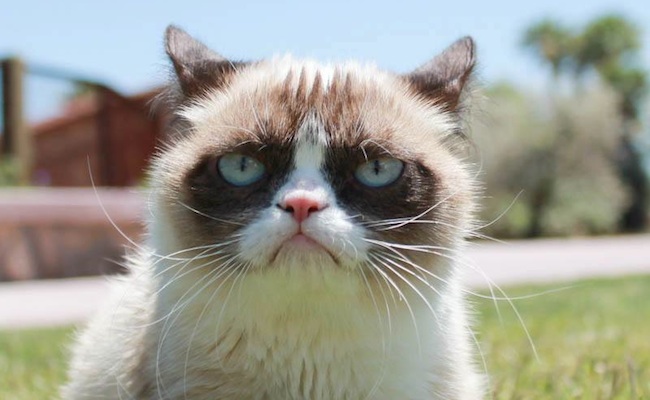 Did You Know Grumpy Cat Has A Movie Deal?

I overheard a semi-internet savvy account executive ask the following question in the break room of one of New York City’s prominent public relations firms earlier this month:

More than semi-internet savvy individuals will know the answer to that question is, “No, but she probably could. That Grumpy Cat’s got a helluva range.”

Well, at least that’s how the movie producers at Broken Road Productions would answer. Katherine Rosman at the Wall Street Journal reported the principals at the motion picture company (who have, under their roster, such feature films as Adam Sandler’s not-so-well-received Jack and Jill) recently inked a deal with Grumpy Cat’s owner, Tabatha Bundesen and Grumpy Cat’s manager, internet meme representative extraordinaire Ben Lashes.

The deal gives Broken Road the option for a film based on the cat’s popular online persona, which garnered massive amounts of  recognition after Bryan Bundesen (Tabatha’s brother) posted pictures of the female feline to reddit in September 2012. If the flick makes it to production, Grumpy Cat will presumably speak and be voiced by a famous celebrity in the vein of Garfield, the 2004 live-action and computer-generated theatrical release that starred the voice of Bill Murray as everyone’s favorite lethargic, lasagna-loving, heavily commercialized cat.

Grumpy Cat is currently promoting her forthcoming book, “Grumpy Cat: A Grumpy Book: Disgruntled Tips and Activities Designed to Put a Frown on Your Face.” Chronicle Books isn’t set to release the title until September 18, 2013, but it’s already selling very well. Amazon pre-orders rank it at the time of this posting at #732 in sales in books overall.