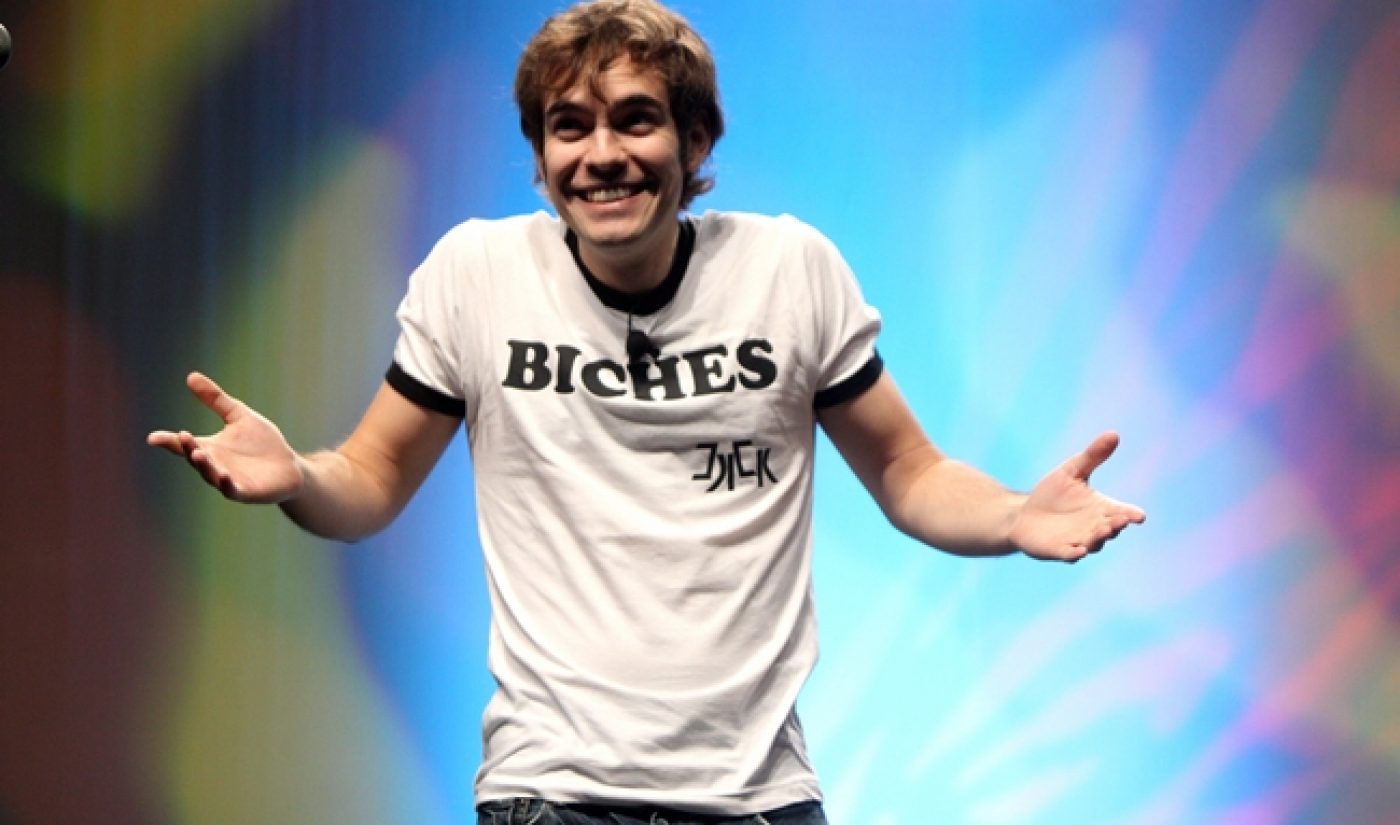 Before he was collaborating with the Fine Brothers, Smosh, and Shane Dawson, and starring in MyMusicShow, a series funded by YouTube’s $100 million dollar channel initiative, John Patrick “Jack” Douglass (a.k.a. Jacksfilms) struck gold with The WTF Blanket, a parody of a late night television commercial about the Snuggie: a fleece, body-length blanket with sleeves. Though not his virgin video effort, the 1:45 clip scored over 20 million views and set the tone for his future films:

So what can we learn from a film student who used YouTube to kickstart his filmmaking career?

Back in 2009, American University senior Jack Douglass lived off-campus in a small attic with several friends and was so broke he was living off of Ramen Noodle packages. We don’t mean the noodles, we mean the actual packages. So he found a Snuggies commercial online and redubbed it with his own audio commentary. And it paid off. After a month, he received a check from YouTube for over a G. Douglass continued to DIY, including on the VidStatsX chart topper, Your Grammar Sucks, a web series that lampoons the horrible grammar and spelling skills of most YouTube commenters. Tinseltown scriptwriters need not apply! Mr. Douglass lifts the barely legible comments off of YouTube and Facebook. He also performs in and edits his own videos. What’s the lesson? People don’t achieve long term success on YouTube through magic. It takes sweat equity.

Odds are, you grew up watching Hollywood movies with production budgets bigger than the GNP of most South American countries. And those budgets continue to skyrocket. Iron Man 3 cost $200 million to produce, while Pirates of the Caribbean: On Stranger Tides cost $250 million. All the pirates in history didn’t pillage that much. These days, the average budget for a Hollywood studio feature is over fifty million dollars. If you have access to fifty million dollars, what the f are you doing reading this blog? If you don’t, here are some words to live by: When it comes to webisode budgets, size matters. And in this case, the smaller the better.

Let’s say you can afford $1000 to create one really cool web video. Let’s even imagine that it becomes a big hit and goes viral. Now what? You’ve had your 15 minutes of fame, but once the video’s over people move on to the next one and forget about you. But lets say you scale down your concept so that you can create 10 vids for the same $1000 dollars. Now you have a whole series that’s infinitely more likely to gain subscribers. As SNL’s Andy Samberg told WIRED Magazine, “If you want to make YouTube your sole place to make money, you have to strike a balance between spending less and producing more. Because the more you produce, the more followers you gain. It’s a more intimate relationship between the creator and the viewers than on TV.

Before it was a hundred million dollar business, the hula-hoop was an idea. Before it was a trillion dollar business, Coca-Cola was an idea. Correction, a great idea. Think about it: A soda originally made from the same stuff as cocaine… sheer genius. Intellectual vision can provoke trends, buzz and bank. Same goes on the Web, so start with an idea that’s relevant, trending, or completely original. Snuggies are relevant and recognizable because the infomercial was on TV more than the President. And Jacksfilms was completely original because he lampooned the sh*t out of an infomercial everyone hates.

Now, come up with your own big idea small budget masterpiece!

The First Drafts Series is a Tubefilter column that highlights and critiques the first online video work of the world’s greatest online video stars. It is written by the savvy online video experts Frank and Lynn Chindamo. Frank teaches webisode production at Chapman University and USC School of Cinematic Arts. Lynn is an award winning webisode creator who has written and directed series for Babelgum, Planet Green, and Petco. She is the world’s first Internet Stardom Curator, with 500,000+ followers on Myspace, and has written a book on the subject – Internet Stardom: Insider Secrets to Web Fame and Fortune