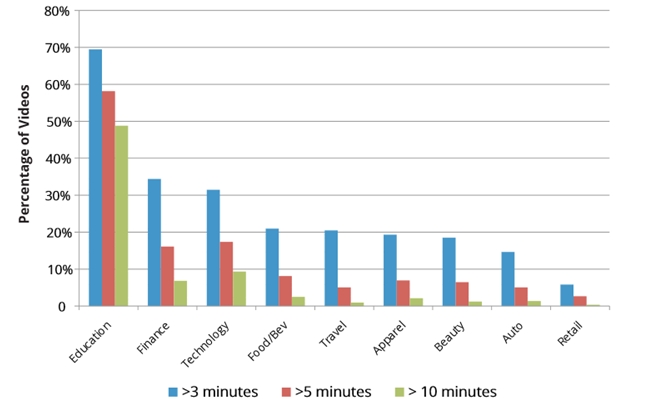 A new report from Outrigger Media has used OpenSlate‘s data to exhaustively research the top 500 brand channels on YouTube. The result can be viewed on OpenSlate’s website.

Just like in November, the two most popular brands are Red Bull and Google. Google had 25 total channels in the top 500 and almost three million combined subscribers, while Red Bull’s slate of extreme sports videos has allowed it to pass two million subs. The five million total subs accrued by these two brands account for more than a quarter of the total subscriptions across all 500 surveyed channels.

Of course, that’s old news. What’s more interesting here is the various, breakdowns, including one that groups videos by category and length. Most brands are embracing the short form of YouTube by having the majority of their videos last fewer than three minutes. It’s not a surprise that the top brands include channels like Old Spice and Nike Football that are committed to releasing creative, bite-sized videos for the appropriate audience.

“The Top 500 brand channels on YouTube form a unique group. The most successful are adapting best practices from the most popular channels on YouTube, while layering in advantages afforded by their substantial creative and media resources,” said Outrigger CEO Mike Henry. “Blue-chip marketers are only just beginning to embrace a consistent, pervasive video content strategy. Compared to their success at developing and engaging an audience through Twitter, the average brand on YouTube still has a great deal of upside potential.”

The one exception is education channels, where almost half of all videos are more than ten minutes in length. Given that many of these channels consist of universities posting up lectures , it’s not a surprise. The way forward for brands is clear: embrace the attention-deficit model that works for the rest of YouTube, or be Stanford.