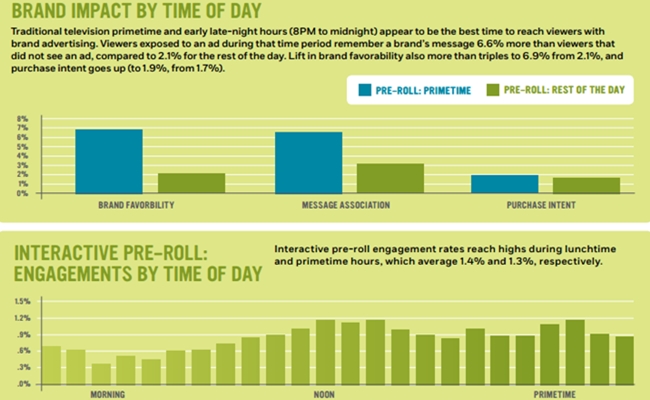 Marketers covet TV’s primetime slots thanks to the high volume of Americans who enjoy leaning back in their La-Z-Boys with a beer and an episode of Big Bang Theory, ready to sit through a barrage of bright advertising spots. However, new research shows that the popularity of primetime isn’t limited to the television. According to a report by TubeMogul, the only video crowd prefers primetime as well.

TubeMogul found that consumers remember pre-roll online video ads more often when they view them during primetime. Specifically, viewers are 3.9% more likely to remember an ad during the hours of 8 PM and midnight compared to the day as a whole. Brand favorability (which measures how much a consumer likes a brand) also increased during primetime, as viewers were 6.9% more favorable towards a brand whose ad they saw in primetime over not seeing an ad at all. Overall, seeing a pre-roll ad only increased brand favorability by 2.1%, so the primetime positioning led to a 333% increase.

The primetime bloc also shows the most impressions and the best engagement; between 8 PM and 11 PM, viewers clicked through an ad 1.4% of the time. Personally, I feel as if I click through that many ads just trying to pause the damn things.

The full TubeMogul report, which includes details on ad completion rates and CPM, can be viewed here. Advertisers would be wise to take note of this research. While the narrative described in the opening of the article is still an active one, plenty of people are now powering off their TVs and cuing up a House of Cards episode instead.