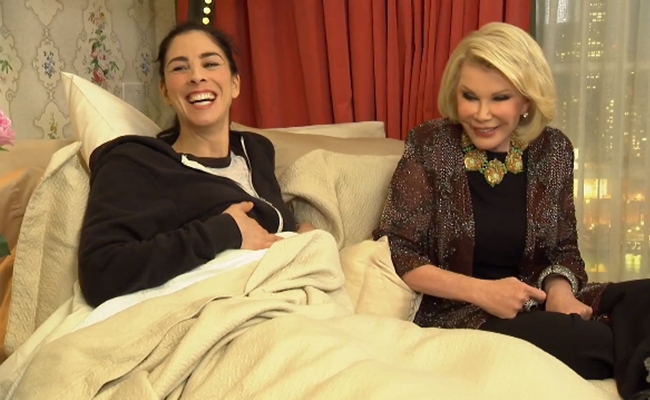 Joan Rivers is getting into bed with some of her big shot showbiz friends. The quick-witted comedienne and talk show host has launched In Bed With Joan, a talk show web series where Rivers and a guest shoot the bull for close to a half hour.

Rivers’ first guest is comedienne Sarah Silverman, who snuggles up under the covers to tell Joan about writing jokes. The TV icon has a grandmotherly vibe (albeit a grandmother who’s had a martini or two) and Silverman claims to want “the full mommy experience,” playing up a childlike innocence. The banter between the pair is free-flowing and easy, and it could have just as easily been contained within a podcast. Of course, in that format, we wouldn’t be able to look at Rivers’ beautiful face.

Rivers was also a onetime guest on Larry King’s Larry King Now web series, and her new venture seems like a more biting, sardonic twist on King’s web presence. Both are older TV veterans who are leveraging their influential careers to run a long form interview series on the Internet. And, of course, they both sport stereotypical New York accents.

The In Bed With Joan channel still has fewer than 1,000 subscribers, so make sure to get on the bandwagon now if you want to say you liked the series before it was cool. For those of you who are just looking for something to have on in the background during working hours, In Bed With Joan provides a suitable distraction.