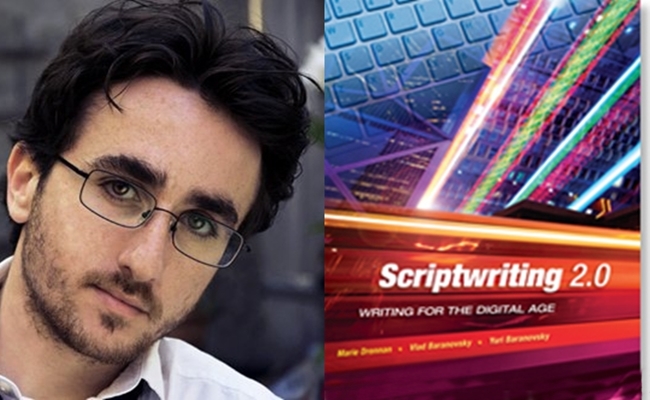 Yuri Baranovsky knows what it takes to make a successful web series. The writer/producer/self-described “web celebrity” has had a hand in creating winning shows such as Break A Leg, LoveMakers, and Leap Year (for which he and his brother Vlad are up for a Streamy Award – in the Best Writing category, of course). Baranovsky has long used his blog as a way to pass on the secrets of online video success. However, a new textbook is taking things to the next level by providing an official outlet for his thoughts.

Baranovsky is one of the authors of Scriptwriting 2.0: Writing For The Digital Age, a scholastic publication now available for purchase. The textbook purports to be the first academic text aimed at new media screenwriting, and is already drawing positive reviews from various new media professors. “The important aspect of this book is…the blend of traditional story structure skills with heart, soul, conflict, and imagination residing in the discipline required to make the transformation from notions in artists’ heads to actual practical projects,” said UCLA screenwriting program chairman Richard Walter.

Baranovksy explained how the online screenwriting textbook, which also contains tips for marketing and copyrighting an online video product, stems from his own experience as a creator:

“[My brother] Vlad and I created one of the first web series…and now we’ve written the first digital screenwriting textbook. Our goal has always been to innovate and push digital entertainment forward. When people said only short-form would survive online, we created Leap Year — a series that got more views and fans after we created 18-22 minute episodes. Our Slurpee Unity Tour was one of the most successful online campaigns (Winner of PRO Campaign of the Year Award, garnered 1.7 billion media impressions) — our goal has always been to forward not only new media but entertainment as a whole, and we’ll keep chipping away at it tirelessly until we get it where we all want it to be, or we give up and make porn.”

New media studies programs have been steadily popping up around the country, and with Scriptwriting 2.0, professors can now take the words of one the industry’s savviest writers as gospel.