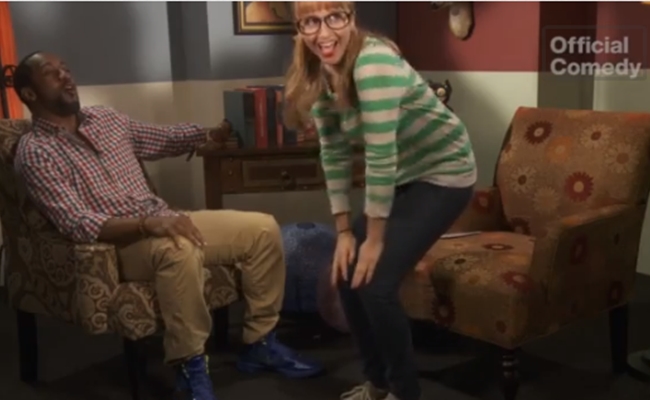 Nerdist has proved that the nebulous, vaguely geeky ‘nerd culture‘ classification can make for a top channel on YouTube. Several other big name channels (iJustine and Geek and Sundry come to mind) have shown that adding a feminine presence to a nerd channel can, fairly or not, vault it up to the next level. This philosophy is central to Geeking Out With Kerri Doherty, a new interview series Bedrocket‘s Official Comedy channel.

Doherty is a New York-based humor writer who we can tell is a geek because she wears oversized glasses. If that oversimplification isn’t convincing enough for you, feel free to browse the Geeking Out vlog that Doherty has compiled on her personal website and YouTube. She hangs out at NY Comic-Con, interviews TV actors, and recreates her favorite scenes. Judging from her body of work, Doherty is less of a ‘loves-video-games-and-fantasy-fiction’ geek and more of a ‘strangely-passionate-about-pop-culture-in-an-awkward-way’ geek. Some people would argue there are certain semantic distinctions to be made here, but I’m not going to do it. As far as I’m concerned, Doherty is a geek.

The first episode of Geeking Out features Doherty and actor Jaleel White, the man behind the Steve Urkel character on Family Matters. If you’ve never heard White speak outside of his most famous character, his cool composure can be very jarring. For me, however, it was more fun to watch Doherty act intensely weird around a man who is clearly one of her childhood icons.

Interview series have to feature enough unique quirks to elevate beyond a static shot of two people talking two each other. Becoming does this with smart use of camera and setting, while Infonaut distinguishes itself with a specific connection to the gaming video industry. For Geeking Out, Doherty is the centerpiece; her kooky interview style is reminiscent of the awkward interviews that have made the Daily Show and Colbert Report famous. If such a combination sounds like something you’d enjoy (i.e. if you like Nerdist), you’ll like what you see here.