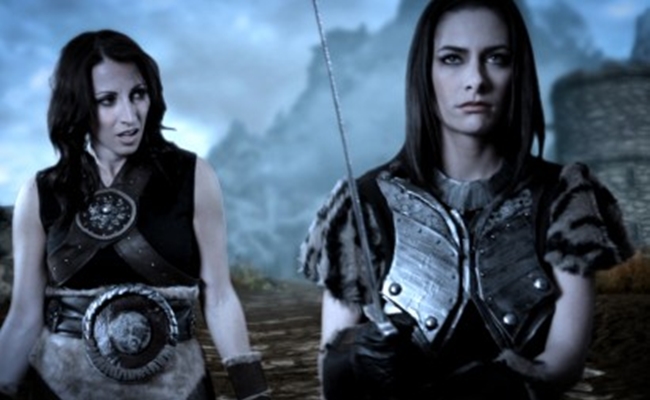 Earlier this year, actress Kristen Nedopak gained over 720,000 views for ‘To Lydia With Love‘, a comedy video based on The Elder Scrolls V: Skyrim. Now, with the help of the Fullscreen network, Nedopak is turning her Skyrim Parodies into a full-on series, which she hopes will add her name to the list of gaming’s most-revered gaming goddesses.

The Skyrim Parodies features Nedopak’s adventures both inside the world of Skyrim and outside of it (where we see her playing the game in her living room). The other main character is Lydia, one of the game’s NPC companions; most of the humor is derived from the ways in which Lydia’s video game logic is juxtaposed against Nedopak’s own decision-making. New episodes will be released weekly on the next five Mondays, but the first episode, titled ‘Carry These Burdens’, arrived on November 11.

Nedopak waited to sign with a network before releasing the entirety of The Skyrim Parodies. “I know for many of my fans, it has been a long time coming for this moment.” said Nedopak. “But we wanted to release the entirety of the series at the right time with the right platform…by commemorating the one year release date of the game and partnering with the thriving Fullscreen network on YouTube, we couldn’t have asked for a more ideal way to bring the rest of these episodes to the web!”

The ultimate goal for The Skyrim Parodies is to turn Nedopak into a nerd gaming icon along the lines of Felicia Day or iJustine. While I’m not sure if she’ll have the good fortune to reach those heights, her series has definite potential. Skyrim jokes are a bit passé at this point (and ‘arrow to the knee’ jokes are extremely overplayed), but the idea of mixing video game and real world logic is a winning combination, especially for a talented (and good-looking) woman like Nedopak.