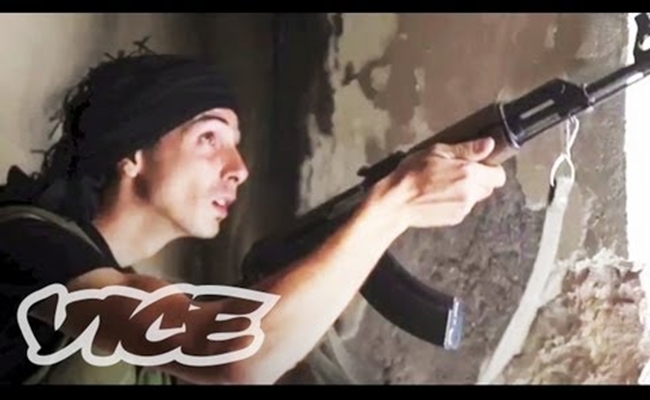 For several months, photojournalist Robert King has had his lens focused on Syria, where he has shown the world a grizzly portrait of the civil war that currently envelops that nation. Now, King is proving he’s just as good with video as he is with photos. His footage is the centerpiece of Ground Zero: Syria, a new series presented by VICE that brings viewers a closer look at the ongoing strife in the Middle East.

A disclaimer before the first episode warns potential viewers that the series contains “extremely graphic imagery,” and truer words have never been spoken. The first episode goes inside a field hospital in the city of Al-Qusayr filled with many wounded Syrians, and it resembles a house of horrors as much as anything else. One child lies on an operating table where doctors are frantically pouring anesthetic over his disemboweled intestines; at another point in the episode, the lead doctor attempts to revive a baby who is so blue and limp that he looks like a prop infant.

The result is a ghastly and harrowing collection of scenes that is certainly not for the faint of heart. If you have the stomach for Ground Zero: Syria, however, it stands as an incredibly powerful piece of journalism.

The civil war in Syria has been ongoing since early 2011, when Syrian President Bashar al-Assad ordered his military to open fire on protesters who were participating in the Arab Spring movement. I could definitely sense an noticeable anti-Assad slant within King’s work; he makes sure to highlight the small children who have been killed or injured by the Syrian army, and while the clinic serves victims on both sides of the fighting, most of the casualties who appear in the episode seem to be either rebel fighters or civilians. Even the episode’s title – ‘Assad’s Child Victims’ – acts as a pro-rebel emotional appeal.

Of course, later episodes could still take a look at the other side of the conflict. After all, a line in the series trailer claims the series will be “starting next week, ending when it’s over.” I know it sounds pessimistic, but after watching the first installment of Ground Zero: Syria, it’s hard not to think that King will be embedded in the warring country for quite some time.