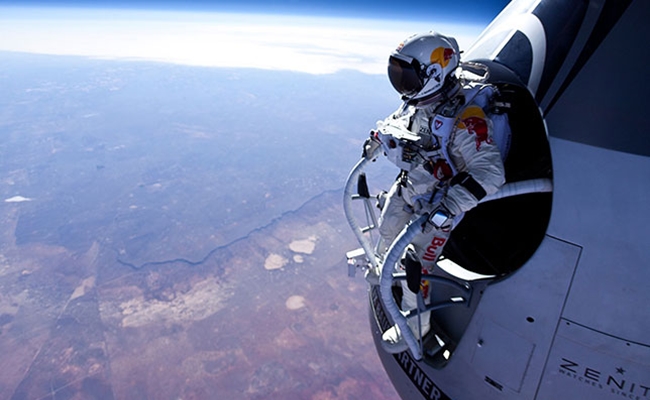 Red Bull has always been an innovator in the online space; the energy drink giant brands itself well around extreme sports, amassing over 365 million video views on its channel, a YouTube Original. Red Bull has shared some amazing videos with us in the past, including the jaw-dropping Danny MacAskill ‘Way Back Home’ stunt reel and the death-defying Travis Pastrana rally car jump.

On Sunday, the channel generated a never before seen level of exposure by offering up a live stream of the certifiably insane Red Bull Stratos event, where extreme skydiver Felix Baumgartner jumped out of a capsule 128,000 feet above the ground and landed safely less than five minutes later.

The event was live streamed on Red Bull’s channel and drew over eight million concurrent viewers at one point right before the dive began. This prolific amount of exposure shattered the record for the most traffic to one live stream, previously held by NBC’s 2012 Olympics coverage. Not only did Red Bull Stratos eclipse that record, but it beat it 16 times over. It’s the second time this week that YouTube has handled a massive amount of live stream traffic; on Thursday, millions watched the Vice Presidential debate through the video sharing giant.

Baumgartner was able to break the speed of sound by travelling over 833 miles per hour, which, last time I checked, is really damn fast. After the dive, he explained how “Sometimes we have to get really high to see how small we are.” Well said, crazy-extreme-athlete-space-jumper-guy. Well said.

The first attempt at the death-defying jump was aborted due to uncertain winds, and Red Bull posted several videos on its channel showcasing the preparation that Baumgartner and his team had to carry out to ensure that he didn’t kill himself. I certainly expect many more videos in the coming days recapping the live stream and offering an indelible source for viewing the crazy footage. For now, all we can do is look back at an historic day of online video and stop making excuses when we don’t feel like rolling out of bed after the first snooze. After all, if a guy can jump from 128,000 feet up, I think I can get up and make some waffles.