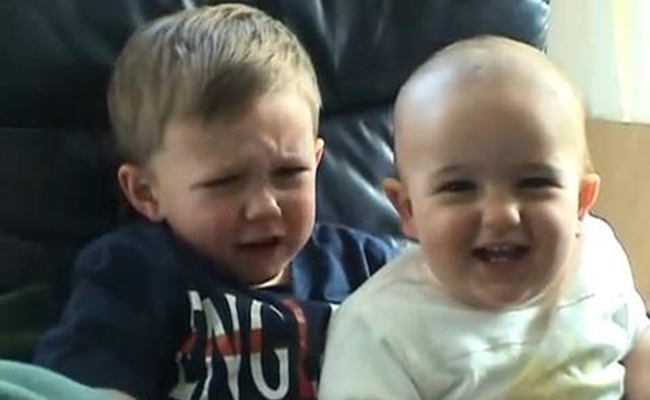 I’m surely not the only person who’s noticed that 90 percent of all the videos that go viral on the internet are either cute animals or cute children, and no video better captures the mass appeal of adorable toddlers than Charlie Bit My Finger, the precious home video of one year old Charlie Davies-Car chomping on the finger of his three year old brother Harry. The video has been viewed over 486 million times, making it the sixth most viewed video on YouTube. In contrast, there’s only one other non-music video in the top 30, and it’s all the way at the bottom of the list (your guess is as good as mine).

Charlie Bit My Finger has made over 100,000 pounds, but it looks like Charlie, Harry, and their father Howard have bigger plans in mind. The family will work with a production team at video marketing company Viral Spiral to create a new series of original programs based around the two children. The content will possibly include viral video reviews (a la the Kids React series), with the appeal similar to several videos Howard has uploaded since the original viral hit, such as one where his adorable boys play on a new trampoline.

The completed videos through distribution company Rightster. Viral Spiral is a company that has found success by helping viral video creators better market themselves; one of the company’s previous endeavors was a Where’s Waldo? style book featuring Fenton, the dog in a popular video called JESUS CHRIST IN RICHMOND PARK. In addition to the original programming, Viral Spiral previously released a Charlie Bit Me app which lets users play around with the video in various ways. Both Fenton and the Davies-Car children have been licensed to appear in ads.

It definitely raises a red flag that these kids seem to be getting exploited in some regard (who knows whose decision it was to put them on a talk show or auto-tune them). Other parents, such as David After Dentist‘s father, have been criticized for child exploitation, intentions here seem to be good.  “We’ve taken the lead of their dad. We don’t apply any pressure – quite the opposite,” said Viral Spiral CEO Damien Collier, “There’s always been a desire from the boys and their father to do more.” In that case, bite away, Charlie. Bite away.