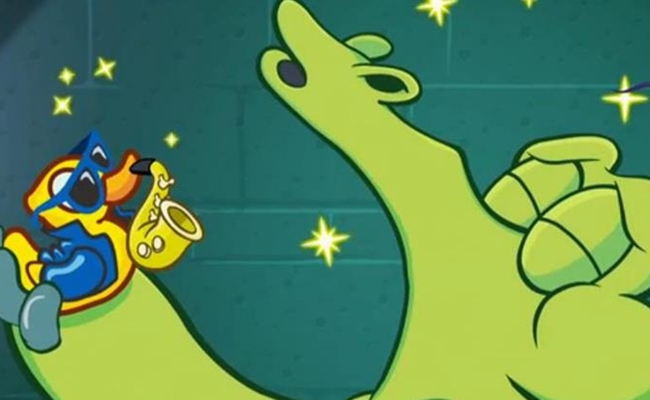 The Where’s My Water? mobile game became a smash hit last year when its combination of simple-yet-challenging gameplay and colorful presentation helped it become one of the most downloaded iPad apps ever. Now, Disney (the game’s distributor) is choosing to milk every dollar out of the game and its main character, an ablutomaniacal alligator named Swampy. They’ve decided to make Swampy and his reptilian comrades the stars of a new animated web series, titled Swampy’s Underground Adventures. The show will debut in October on Disney’s online video portal.

In Where’s My Water?, Swampy’s constant desire to bathe is routinely interrupted by faulty plumbing, which the player must fix by rerouting a water supply so that it flows into his tub. Though I thought the ‘game where player helps cute animals get what they want’ market had been cornered by Cut The Rope, Where’s My Water?‘s success proved that iPhone, iPad and Android users will happily pony up for a clone if it’s well-made and can keep their attention long enough to justify the 99 cent price tag. It also can’t hurt that the kids love it.

Disney has released two teasers for Swampy’s Underground Adventures. None of the characters will talk, and instead will only communicate through vaguely humanlike grunting noises. In addition to Swampy, the game will feature Cranky, the game’s antagonist (and the one responsible for scrambling the sewer system in the first place) along with Ally, the female who both Swampy and Cranky are smitten with. The second trailer features Swampy creating a cover of Queen’s ‘Under Pressure’ using drops of water, a hive of bees, and his saxophone-playing rubber ducky (of course!):

This trailer gives a better sense of what we can expect from Swampy’s Underground Adventures. Every way in which alligators and plumbing could possibly interact will most likely be explored in this series. That alone should be enough to hold the attention of kids who are fans of the series, with the song choice acting as an appeal to parents.

The series will be Disney’s first based on one of their mobile game characters, and together with Where’s My Water?‘s Phineas and Ferb-themed spinoff, Where’s My Perry?, represents a concerted effort to cash in on the game’s popularity. Whether you love Disney for their cuddly characters or despise them for their cash cow mentality (as with several app store commenters), at least give them credit for throwing another unique web series into the fray.