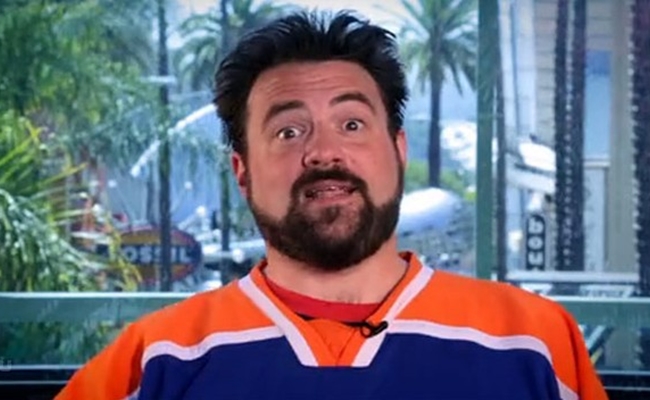 Shira Lazar will be joining Anthony Zuiker at Social Media Week Los Angeles tomorrow (again, more on this one later today), but in the meantime, she’s been busy hosting a return appearance from one of the highest profile guests that her show What’s Trending has ever had on set. Yesterday, filmmaker Kevin Smith stopped by to weave a masterfully told tale about his encounter with a paparazzo outside his house and answer fan questions about hate mail, Drake and more.

Even when talking about an encounter that only a celebrity can fully understand (how many of us have been stalked around the block by a man with an enormous camera?), Smith manages to mix a certain everyman appeal into his storytelling style, the same appeal that underlies his films (especially Clerks). I was particularly amused by Smith’s repeated assertion that he would “put everything on Front Street,” which usually preceded some admission of profuse sweating. And, for the record, this isn’t the first time he’s told a story combining paparazzi and obesity. Smith may be a celebrity, but in his own heart he’s still just a fat guy in a hockey jersey.

Smith also answered questions on What’s Trending’s ‘Troll Food’ segment, which requires guests to answer questions that they missed on their personal Reddit IamA threads. Smith filled in the gaps from his recent appearance on the site, giving us even more anecdotes in his own personable style. According to Smith, rapper Drake is actually a great actor, and was “one of the most believe kids” on Degrassi: The Next Generation, where Smith has made a few guest appearances. He also quipped that Drake is “very good at YOLO, if you know what I mean.” Another question dealt with hate mail, where Smith discussed the 300,000 pieces of it he received after the release of the religious satire Dogma. Apparently it took the Jewish Weinstein Brothers a lot of effort to figure out which parts of the movie had been offensive to some Catholics (answer: all of them).

It’s good to see What’s Trending continue to up the celebrity of its guests, with Stan Lee and Jenna Marbles making recent appearances as well. And I personally love any publicity for Smith, one of the great native sons from my home state. Jersey pride!