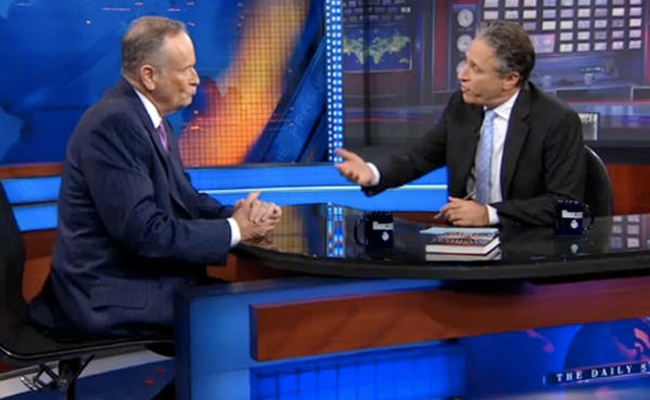 Stewart and O’Reilly to Debate in Live Streamed, Air-Conditioned Event

Jon Stewart and Bill O’Reilly have quite the rivalry. A recent two-part clip of Jon Stewart on The O’Reilly Factor has drawn over 3 million hits, making it by far the most popular video on the FoxNewsInsider YouTube channel. Meanwhile, O’Reilly has also appeared on Stewart’s Daily Show several times, drawing hundreds of thousands of hits on Comedy Central’s website for reach appearance. Now, it appears these two punditry giants are ready to cash in on the popularity of their friendship. They will be debating each other for 90 minutes in a live streaming event they’re calling The Rumble In The Air-Conditioned Auditorium. It all goes down on October 6th at 8 pm, and as the event’s promo says, “it’s why Al Gore invented the Internet.”

Viewing the event will cost $4.95, a fee which will allow all-time access to the debate on The Rumble‘s official website. Half the money will go to “a number of charitable causes” supported by the two debaters, but no word on which charities were chosen or how much bickering was involved in picking them out. No word as to what the other half goes to, though my guess is Stewart’s mousse collection and O’Reilly’s new teleprompter fund. An FAQ reminds everyone not to share the debate with people who haven’t paid, since the show’s producers have apparently forgotten that asking people not to share video on the Internet is like asking the Earth to stop rotating on its axis.

The debate will be held at George Washington University in front of a paid audience. It’s hard to believe the audience won’t be heavily in favor of Stewart, who has high popularity on college campuses. The showdown will occur just 3 days after the first presidential debate between Barack Obama and Mitt Romney, so the major stories from that event could be used as debate topics for Stewart and O’Reilly.

Both of these men are entertainers, and good laughs should be expected more than hard-hitting political analysis. Both men have created promo videos for O’Reilly’s YouTube account: O’Reilly’s video has him taking a casual dig at Stewart’s “18 writers”, while Stewart apparently ignored visits from Conan O’Brien and Colin Quinn in order to prepare for the debate. If all goes well, the event can live up the massive build-up it is sure to receive and provide the paying audience with some much needed humorous yet honest discourse.