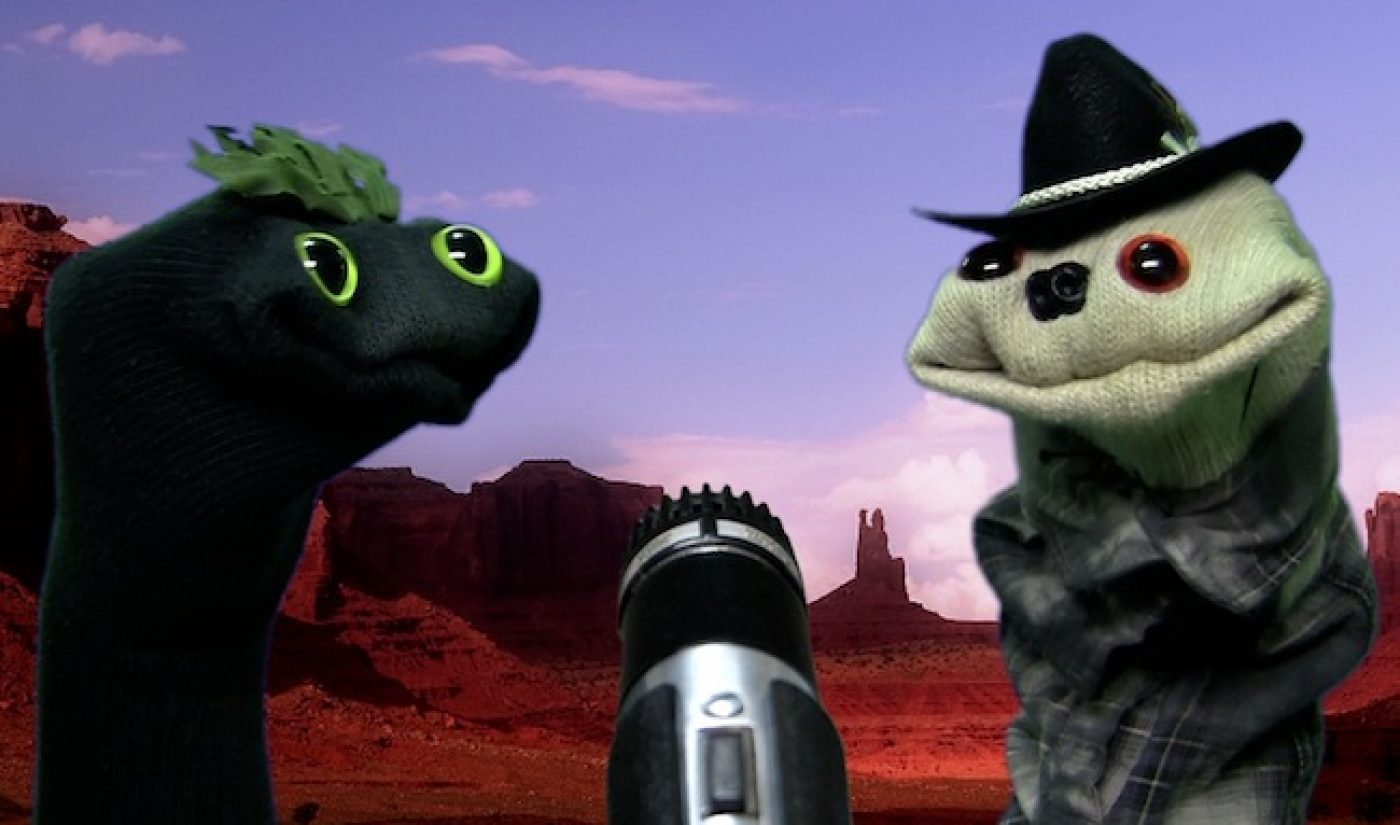 Sock puppets Sifl and Olly entertained kids with a superficially innocuous aesthetic that belied a profane, sexually suggestive, and comically awesome tone for two seasons before the outbreak of Y2K on an MTV that preferred original programming to original reality programming.

The variety show created by artistically gifted childhood friends Liam Lynch and Matt Crocco released a third unaired season by way of DVD after MTV cancelled their series in 1999. Thereafter, the candid conversational relationship and music-video related antics of Sifl and Olly had been relegated to sporadic appearances on Lynch’s personal podcast, Lynchland. That is, until now.

The Sifl and Olly Show is making a comeback with a new season of new episodes related to a new theme on a new network.

Sifl and Olly Video Game Reviews features real reviews of fake games and is distributed by Machinima, the largest YouTube network on the internet with 4.8+ million subscribers and a roster of high-profile programs (e.g. Mortal Kombat: Legacy, Dragon Age: Redemption) in its episode list. The first installment of the new Sifl and Olly debuted today. Check it out:

We caught up with Lynch (who, in addition to Sifl and Olly has directed features for Jack Black’s band, Tenacious D and Sarah Silverman, as well as several documentaries, music videos, and television commercials; worked one-on-one with former Beatle Paul McCartney at the Liverpool Institute for Performing Arts; and released more than a few musical tracks, including the one-time radio hit, United States of Whatever) to get the download on his Sifl and Olly redux.

Tubefilter: It’s been a while. What made you decide it was time to bring Sifl & Olly back to the screen? Were there any unexpected snags in the process?

Liam Lynch: No, there were no snags in the process (or in the socks… ha!).

I’ve owned the characters for a long time. They reverted back to me thre years after the show went off the air. I know it sounds dumb and I wish there were a better reason, but it just felt right and just felt like it was time. It seemed like it would be really fun to do again. I have everything I need to produce the shows myself and so there wasn’t really any reason NOT to do it again.

TF: So, why Machinima?

LL: Well, firstly because I’m a huge gamer and familiar with them…but mostly because they’re one of the biggest networks that exist without being a TV network.

I wanted freedom to do these my way and to do anything I wanted and that’s just not possible with TV networks. I also think that TV networks are the new radio…they aren’t as cool as they use to be. They’re all in a process of slow suicide…Like they’re busy standing around watching the music industry burn and sink below the waves because of the internet, and just now realizing they’ve been sinking, too (and getting all panicky trying to bail water  out of the boat with their coffee cups).

A TV exec’s worst nightmare is a video of a kitten puking shot from a cell phone for free that gets more views then their multimillion dollar shitty shows.

TV is in a really exciting place right now though as the internet takes hold as the new media form. I think Machinima is one of these weird things the internet creates and so it’s of the people…It’s people’s ideas, and I like that. They also reach as many people as a lot of cable networks reach. I like the spirit of it.

TF: Did you do a lot of video game-related segments on the old show? And why is that the subject you chose for the new one?

LL: Yes, there were several video game references and skits on the MTV show. Season 3, we even had Tony Hawk on the show when Olly becomes obsessed with Tony Hawk’s Pro Skater game. Or there was a song we did called Rock It Through The Wasteland, where we sing to the cheesy metal music in a driving game we play. So, there were several video game based skits but never it’s own repeating segment.

I chose the subject because I’m a gamer and love games. I wanted to do a segment on just games before but it wasn’t wide enough of a subject. Gaming has proven itself as a leading entertainment industry now though…even those that aren’t console “gamers,” are still gaming on their phones. More people play games now.

Also, in the past 10 years it’s become “cool” to be a “nerd” or a “geek”… and so games aren’t as looked down on as they were back in 1994 when I started doing Sifl and Olly on MTV Europe.

TF: What’s changed with Sifl and Olly since the show ended in 1999?

LL: Well it’s nice to finally see them in HD… and in cinema ratio. The graphics have improved but Sifl and Olly are the same.

TF: In the trailer, Olly mentions that “we can put it on the Internet, so there’s no rules.” What can we expect from the show given this freedom that wasn’t as unrestrained when you guys were on TV?

LL: Well, when we were on MTV we had to fight lawyers because in one sketch we said the word “fire.” They had banned the word “fire” from their shows because someone heard Beavis and Butthead say “fire” and so someone of course caught himself on fire and sued MTV.

Sockheads and those new to the program can check out Sifl and Olly Video Game Reviews on YouTube.com/Machinima.