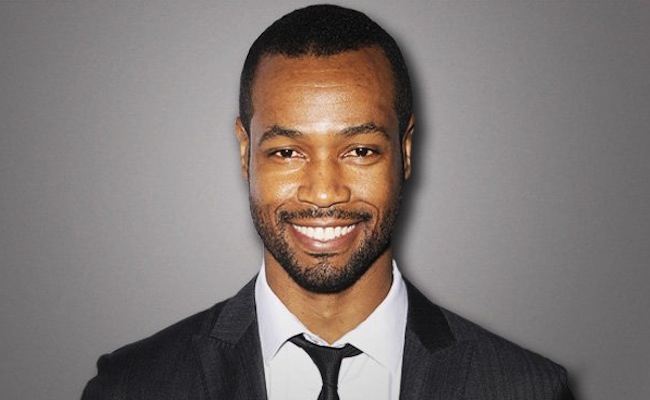 If you don’t know the name Isaiah Mustasfa, you most certainly know his work (which can be seen here, and here, and, aw heck, just take the whole channel) and his most famous moniker (which is the Old Spice Guy). He played the titular character in an ingenious ad campaign by Wieden and Kennedy that ranks amongst the most successful interactive and online video marketing platforms of the YouTube, Twitter, and internet age.

But Mustafa’s now ready to show online video audiences he can play fully-clothed parts in online video programs where the characters aren’t conceived by looking at the covers of Norah Hess novels and watching a lot of Brad Neely. Mustafa is one of the latest additions to the Hulu’s daily web series, The Morning After, where he replaces Brian Kimmet as the male host.

The first episode featuring Mustafa makes it clear from the opening sketch the persona of The Man Your Man Could Smell Like won’t be totally absent from the program. His voice is always charming and silky smooth while discussing things from racing chairs across the office to shooting an arrow through his underling’s eye. In addition to the sketch work, Mustafa takes on the usual The Morning After responsibilities of serving up the previous day’s entertainment news and interviews with a sly, witty edge.

It’s been an interesting month all around for Old Spice. In addition to Mustafa popping up on Hulu, the company’s other spokesman – bodybuilder and film star Terry Crews – has found his way into another ad for the deodorant company, but it’s quite different from his previous work.

This time, Crews is in an interactive video ad on Vimeo, where he first plays a song using his muscles and then invites you to use your keyboard to make one with him. It’s part online video, part online game  took an incredible amount of work to make. But the effort has paid off as the ad has easily accumulated a seven-figure viewcount.

All in all, another good couple of weeks for the stars of one of the most successful ad campaigns of the Internet generation. It remains to be seen if Mustafa can make a career out of a series of 30 second spots, but he’s off to a good start.