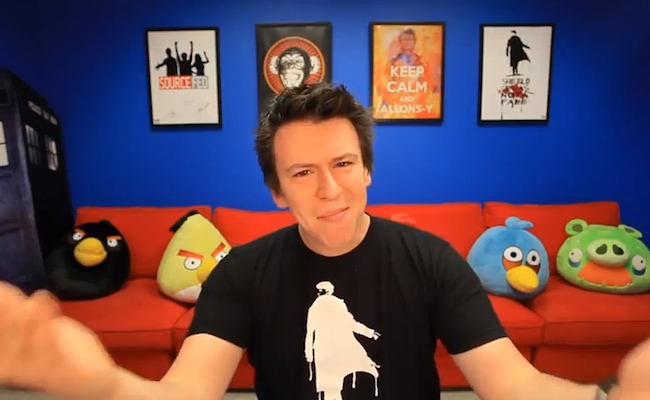 There are 60 or so channels that have launched out of the 97 or so channels that were originally announced as part of YouTube’s $100 million Original Channels initiative. And of those launched channels (which are helmed by the likes of Chris Hardwick, Tony Hawk, The Washington Post, and more notable individuals and entities from the online and traditional entertainment industries) none of them are doing as well as Phil DeFranco’s SourceFed.

The Daily Show for the YouTube generation is a multiple-times-a-day program which disseminates the latest news, current events, and pop culture with a “sometimes sardonic, sometimes reverent tone and always informative perspective” to an audience comprised of hardcore Phil DeFranco fans (who rank amongst the two million or so subscribers of his original YouTube channel he’s been able to accumulate in the last six or so years of making The Phil DeFranco Show) and new viewers.

A rotating array of hosts comment and convey facts and opinions about everything from Men in Black 3 to a girl who was suspended from school for making an anti-bullying video for class and everything in between (in addition to a handful of peripheral series dedicated to viewer comments, behind the scenes footage, on-the-street, interactive game show Q&As, and one-on-one interviews with online video celebs).

The program/s is/are good. And if you don’t believe, you should check out the viewcount.

DeFranco and company uploaded their first installment of SourceFed on January 23, 2012. That video, and the subsequent 400+ they’ve uploaded since, have amassed over 100 million views on YouTube (or, if you want to use today’s exact numbers, 103,717,617 views). That’s a lot! For the stats junkies at home, those numbers break down to roughly 25 million views per month, 825,00 views per day, and 250,00 views per video.

If notable individuals and entities from the online and traditional entertainment industries can accumulate a fraction of those views, the YouTube Original Channels initiative will be a sweeping success. And if you don’t account for any one of the views in SourceFed’s now nine-figure totals, be sure to check out what everyone’s watching at YouTube.com/SourceFed.