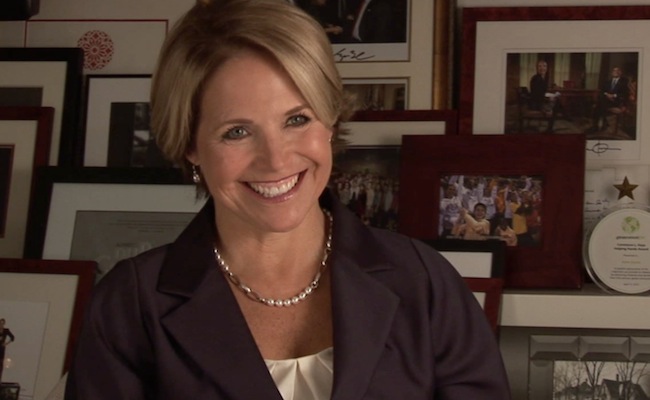 Today Yahoo offered a sneak peak of its programming lineup for 2012 and beyond at The Yahoo Digital NewFront today, which featured top Hollywood talent and industry leaders such as Tom Hanks, CSI creator Anthony Zuiker, Ben Sherwood from ABC News, Bob Bowman from MLB, Ken Marino, and Fabio Vivani from Top Chef. 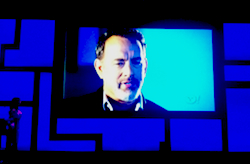 Highlights include the announcement of a new project from the creators of Rock of Ages, the premiere of Katie Couric’s new show on May 1, and the introduction of the company’s third slate of original video programming targeted at men, with six new shows including a talk show in development with Jeff Goldblum.

“We’re bringing celebrated storytellers and sophisticated production capabilities to provide our audience with the types of immersive experiences they’re seeking more of on the web,” said Mickie Rosen, SVP of Yahoo’s Media Network.

Here is the full Yahoo lineup:

Katie’s Take
Each week, Katie Couric will explore topics and issues that matter most to her viewers—including health, nutrition, parenting, and wellness. Every episode will feature interviews with top experts in a variety of fields as well as Couric’s own personal, fun and unique perspective.

Cybergeddon
A digital motion picture from CSI creator Anthony Zuiker, which, in partnership with Norton by Symantec, which brings to life the growing threat of cybercrime.

Dancing With Myself (Debuts 2013)
From the creators of Rock Of Ages comes a musical “jukebox” comedy set in small town Ohio in the mid-80’s, and fueled by a soundtrack of the greatest pop/rock songs of that era. A comedic homage to after school specials of that era, the working title Dancing With Myself is an irreverent and satirical tale of one teen’s quest to fit in and find himself, his girl, and his passion… and maybe a few sweet dance moves along the way. (Matthew Weaver / Chris D’Arienzo /RelativityREAL)

Men’s Slate of Shows and Talent:

Stunt Nation (Debuts in July)
Host: Sal Masekela
A jump shot that bounces five ways to Sunday before landing in the hoop with nothing but net. The guy who stuffs 30 tacos in his face in 30 seconds. The synchronized dance number staged on a speeding rollercoaster…. For anyone who’s ever wondered how they did it (or if it’s all been faked), Stunt Nation is your fast-paced guide to online enlightenment. In each five-minute episode, we see three hilarious, cringe-inducing stunts and feats that demand a second look. But this isn’t just a clip review show. Each week, we’ll have an expert guest who, Mythbusters-style, will help our host breakdown the feat of the week. Each episode is capped off with the weekly FAIL, a feat gone horribly wrong, proving that while the Internet gives, it also takes away. Five minutes. Four feats. One ultimate show. (Fishbowl Worldwide Media. Executive Producers Vin Di Bona, Bruce Gersh and David Beebe)

Yahoo! Sports Minute (Live)
Host: Angela Sun
Like everyone these days, sports fans are busier than ever. But even though their time may be limited, their passion never is. That’s why there’s the Yahoo! Sports Minute—a daily show that quickly gets millions of sports fans up-to-speed on everything that is happening in the sports world. Hosted by the amazing Angela Sun, the Yahoo! Sports Minute is the series that anchors the entire Yahoo! Sports experience and this slate. The show has been the number one online sports show for four years running with more than 46M streams per year and over 7M minutes per month to the largest sports audience online. (Yahoo! Studios)

KaBOOM! (Debuts in July)
Host: To be announced
Featuring a gorgeous host, a hilarious explosives expert and plenty of firepower…it’s three minutes of man nirvana. The concept is simple and impossible to resist: Ridiculously fun objects getting blown to smithereens. Boom and repeat. Man is not capable of ignoring an explosion. It’s in their DNA. KaBOOM! speaks to that little deviant in each of us. Each episode features our jaw dropping “Bombshell” hostess introducing an item that is about to meet its demise. Objects include 500 Twinkies, 1000 eggs, a 10 ft stuffed Panda, a mountain of Boy Band CD’s… Next our charismatic bomb-geek-expert analyzes the fine points of what we can expect and how he is rigging the object for maximum kaBOOM! Ten cameras capture all the action in real time, slo-mo, super-slo-mo and of course our trademarked Slo-As-A-Mo-Fo. The aftermath is as fun as the set up. (Eyeboogie)

The MANual (Debuts in July)
Hosts: To be announced
Monday through Friday, The MANual presents the ultimate guide to rising above masculine mediocrity. From booze and babes, to sex and style, to food and fitness—we’ve gathered the world’s most influential men’s lifestyle experts and the world’s hottest women to bring you daily advice on simply being a better guy. Delivered with a concise mixture of humor and expertise, The MANual covers the topics we know men truly crave. Whether grilling a burger, complimenting a date, or finding your dream job, The MANual is the ultimate men’s guide to rising above the rest. (Yahoo! Studios)

Superfans (Debuts in July)
Superfans examines the amazing, bizarre and emotional extremes that fans will go to in their daily lives—all in the name of fandom. From family rooms modeled after Lambeau Field, to 300 straight days of wearing the same Drew Brees jersey, to 64 years without missing a game at Fenway, Superfans is an entertaining mix of unbelievable fanaticism and endearing loyalty. This addictive program is a sure-fire hit with our Yahoo! audience who craves extreme stories of fervor, oddity and love. (Yahoo! Studios)

“The media and advertising industries are at a watershed moment, and no one is more poised to take advantage of the shift toward digital content than Yahoo,” said Levinsohn. “Globally, we are a digital media powerhouse, providing high-quality, engaging, and personalized content on every screen.”