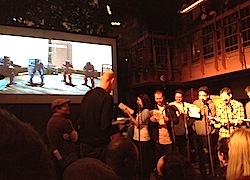 In front of a loud and rowdy crowd of fans, Rooster Teeth performed its first ever live performance of the hit web series Red vs. Blue over the weekend during Blip by Blipwest at SXSW. Blip’s Kent Nichols (of Ask a Ninja fame) introduced the MCs for the event, but had the idea of a live machinima performance well before Saturday’s show.

“I’ve been dreaming about this moment for about 8 years, since the end of season 1,” Nichols said in front of the crowd at the Cedar Street Courtyard.

Nichols’ desire to accomplish such theatrics was well known by Rooster Teeth partner Matt Hullum (who also voices the character Sarge). Nichols has been bringing the idea up to Rooster Teeth principals for quite some time. “Kent Nichols is a longtime friend and he’s been hounding us to do this forever,” Joked Hullum after he performed.

Nichols persistence and vision paid off as the performance of what looked like a live-taping of a Red vs. Blue installment in front of a studio audience became a reality. MCing the event was Master Pancake Theater, two popular Austin comedians that normally perform at the Alamo Drafthouse theater chain. The funny men set the tone of the event by mocking the finale of season 8 and immediately won over the hardcore Red vs. Blue fans.

As they finished warming up the crowd, MPT selected a volunteer to take part in the event, adding an extra amount of spontaneity to the show.

“My favorite thing was the volunteer,” said Master Pancake Theater’s Joe Parsons after the event. “She wasn’t ready to perform, but she was happy to be on stage and happy to do her best job at making pretty awful sound effects.”

The inclusion of a volunteer, two top local comedians and a team of people that love working on the show was a recipe for a successful event. Rooster Teeth never took itself seriously and knew that a live performance was rife with problems, but made the mistakes part of the fun.

With the first live show a success, has this event opened the door to more live performances?

“It doesn’t open the door to them, it kicks the door off the hinges,” said Hullum looking to the future. “We’re going to take the door to a wood chipper, we’re going to grind up the door, we’re going turn it into pulp. The pulp will be made into paper. the paper will be embossed with our logo and cut into invitations which we’ll send out for the next live event.”