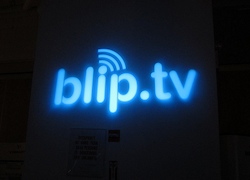 The online video sharing site of choice for many independent content creators and the internet’s self-proclaimed “place to discover the best in original web series, from professional and up-and-coming producers” just secured another round of financing.

Blip (which Tubefilter readers already know has a shiny new logo and is to be no longer known as blip.tv) announced it closed a $12 million round of venture capital from existing investors “including Bain Capital Ventures and Canaan Partners, and debt from Silicon Valley Bank.” Part of this is old news. We told you about Blip raising $6 million from the aforementioned investors back in December, but the additional $6 million in debt wasn’t disclosed until recently.

The new investment comes at a time when Blip is still on the search for a new CEO, but seems to be doing a-okay without one. Chief Operating Officer Steve Brookstein told Erick Schonfeld at Techcrunch 2011 revenues were up 100% over 2010 to total $10 million, a number which Brookstein expects to double again in 2012. The company is also currently seeing more than 13 million unique monthly viewers in the US and over 30 million globally.