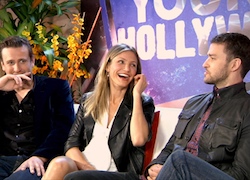 Continuing with their “It’s Not About Age…It’s about Attitude” mission, Young Hollywood launched their new Young Hollywood Network (YHN) on YouTube today. Founded in 2007 by R.J. Williams, Young Hollywood is poised to propel their celebrity and lifestyle multimedia content to a new level of online video visibility.

To see what the pop culture new media network was all about, we sat in on an interview with Young Hollywood’s own Nikki Novak’s and Grammy nominee Melanie Fiona (who also sang and acoustic version of her smash hit 4am live in the YH studio). Novak did her research, asked Fiona funny questions, and exhibited an ability to immediately make her guest feel comfortable.

The atmosphere on set certainly helped (it looks and feels more like a relaxed cocktail party than any kind of online video studio), but it’s clear the friendly professionalism of Novak and the Young Hollywood team made the interview with Fiona entertaining and enlightening. Watching at them in action, it’s clear the YH crew loves their jobs and does everything possible to make the experience of being in their studios a good time.

We recently caught up with R.J. Williams to get the inside scoop on big news at Young Hollywood, features of the new set, and how their new show lineup on YHN is poised to dominate entertainment news one raucous interview at a time.

R.J. Williams: It really feels like there’s something new and exciting that happens everyday. The business opportunities that continue to come our way have been invaluable, particularly from having our studio housed in the Four Seasons Hotel Los Angeles at Beverly Hills – the epicenter for media and entertainment. We took over the space next door and built a door connecting our edit room to a green room to create a cool, fun lounge for talent and their reps and entourages.

TF: What are some of the features of the new set?

RJW: When you walk into the Young Hollywood Studio, the first suite has a greeting area and lounge including a full bar, which is open at all times. To the left is our main production area where we conduct most of our interviews on a regular basis with A-List actors, musicians, athletes, etc.

We have multiple high-definition cameras and production equipment, state-of-the-art custom lighting, and a YH-branded white leather couch and back-drop. In our 3rd room we have a full functioning edit bay where our team of editors work on a daily basis. We set up a server to connect all six of the edit bays so they can now share media at a moment’s notice. It’s topped off with a 100 MB line of fiber optics that allows us to send the content where it needs to go in the flash of a second.

RJW: We’ve been working very hard on this and look forward to premiering our slate of new shows on the world’s biggest video platform as part of YouTube’s new groundbreaking Original Channels initiative. We feel this is the future of content creation and are investing heavily in both our time and resources.

TF: When the Young Hollywood Channel debuts on YouTube there will be one new show each day plus special programming on the weekend. How is your production schedule set up to deliver all of this content?

RJW: Monday through Friday we will be airing five new and different shows. We have Studio Secrets on Monday, Quiet on the Set on Tuesday, The Power Players on Wednesday, Guest List Only on Thursday, and Celebrity Trend Report on Friday.

We are also still producing our original content for our flagship site, YoungHollywood.com. It is definitely quite the undertaking, but we have a strong production team and we have off-site crews that shoot on location in LA on a daily basis. Not to mention we have crews covering all the major events like Sundance, Superbowl, SXSW, Cochella, Comic-Con and of course Award Season. We have made our studio available 7 days a week, 24 hours a day for shoots, so we’re able to be flexible and accommodate talent at their availability.

TF: What have you learned from the process of creating entertainment Young Hollywood content for the web?

RJW: In order to succeed on the web you have to be different, by offering unique content that people can’t find anywhere else. That’s one of the reasons we don’t cover red carpets or press junkets – everyone else is doing.

We’ve learned that shorter content works better on the web, so we always keep that in mind when we air our content. We also have learned the importance of being brand friendly in order to gain ad dollars that is the key to being successful in the content business. We’ve learned you always have to evolve— we always mix it up and try different things in order to keep what we do fresh and compelling.

TF: What are some of the most surprising things that you have experience while launching the Young Hollywood brand?

RJW: I’ve noticed a lot of companies continue to come out of the woodworks and try to copy what we do. When I started Young Hollywood several years ago, we were really one of the first digital brands to stay away from celebrity gossip and rather cultivate those relationships to get such unique access. Our cutting-edge style, our sets, our creatives, our editing format – that’s what truly has set us apart from the competition – and the fact that we’ve never paid our way in by raising large amounts of capital, yet we continue to grow at a tremendous pace.

We feel we are doing something right. We are constantly innovating and always a few steps ahead, so by the time the others catch up to what we’re doing, we are already on to something new.

Tubefilter: Who are some of the people that will be coming into the studio that you are excited about interviewing?

RJW: We are excited about everyone we have coming into the studio! That’s one of the perks about what we do because we have a genuine interest in everyone who comes in. Since the studio launch we’ve had everyone from Cameron Diaz, Taylor Lautner, Drew Barrymore, Justin Timberlake, James Franco, Enrique Iglesias, Pitbull, Megan Fox the list just goes on and on.

I think that in the upcoming months we are really excited about interviewing people who have made their start in the digital space. Interviewing stars, who came up through YouTube is fascinating and definitely keeps with the theme of what we are doing here. YouTube is the most powerful distribution network in existence in both the linear and non-linear world. I look at it as Youtube is now the biggest MSO in the world, similar to what Comcast is in the TV world. Young Hollywood Network is the channel you go for 24/7 exclusive entertainment content – similar to what E! in the cable world. We’ve just scratched the surface on what we intend to do with this network and we look forward to continue innovating for the next generation.