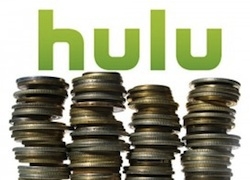 Hulu CEO Jason Kilar recently announced on his company’s blog that the internet’s go-to destination for on-demand streaming of movies and television shows earned over $420 million in revenue in 2011. That’s a few million shy of Kilar’s original prediction from back in April 2011 that the company was on “pace to approach half a billion dollars” in revenue for the year, but still a 60% increase over 2010’s total of $263 million.

So, based on Kilar’s blog posts, Hulu earned somewhere in the ballpark of $157 million more in revenue in 2011 than it did in 2010. Where did that increase in revenue come from? Let’s take a look.

Hulu ended the year with over 1.5 million paid Hulu Plus subscribers, a milestone the company says it reached “faster than any video subscription service” (online or offline) in US history. Hulu’s put together a nice graph that shows the company’s upward tick in its Hulu Plus subscriber base over the past five quarters. 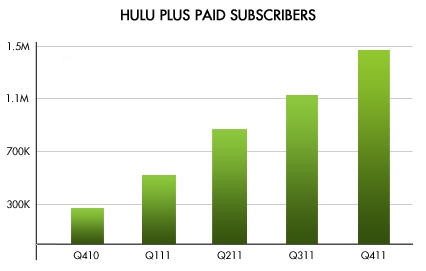 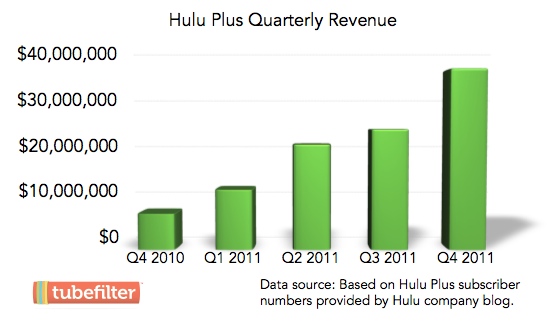 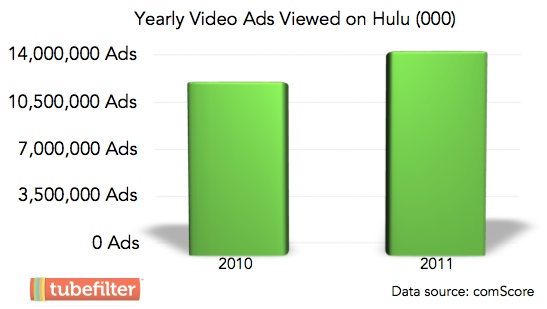 That makes for a difference of 2.034 billion video ads viewed year over year. Take those view counts and multiply them by a $35 CPM and we come away with $71.19 million. That number is surprisingly close to the $71.31 million of Hulu’s year-over-year increase in total revenue we have left over after factoring in the revenue generated by Hulu Plus.

I realize that this math is incredibly simplistic and I have no insight into the financial idiosyncrasies of a multi-billion dollar global entertainment, advertising, and technology company, but the end result seems not so bad for working with an iPhone calculator and publicly available analytics.

But, the big question is, what is Hulu going to do with those extra dollars? Well, it’s going to invest a lot of them in more content. Kilar writes he’s “excited to invest approximately half a billion in content in 2012 on behalf of our users.”