2012: The Year Producers Must Step Up Their Brands

[Editor’s Note: The following guest post was written by Steve Woolf, VP of Content at Blip, and is part of a year-end series of guest posts we’ll be running at Tubefilter. We’ve reached out to a handful of online video experts and professionals to dispense advice, weigh in on the state of the industry and where it’s headed in 2012, and/or discuss his or her company’s role in the ever and quickly evolving new media landscape. The opinions expressed will vary, but the articles all seem to have at leas one thing in common: 2012 will be a very big year for online video.] 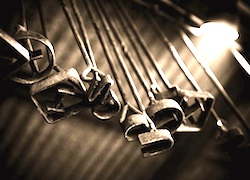 For those with even a passing interest in online video, 2011 has been a remarkable year.

In just the last couple weeks you’ve probably read about comedian Louis CK’s incredible success with direct-to-viewer sales of his new performance special. You may have seen Day[9]’s Sean Plott  listed in Forbes 30 Under 30 in Entertainment. You undoubtedly heard about YouTube’s channel initiative (which in my view is designed to force Hollywood networks and studios to figure out original online video whether they are ready to or not). The mainstream is moving toward online video as much as online video is moving toward the mainstream.

The tipping point that many of us in the industry envisioned back in 2005 at the first Vloggercon is upon us. We’ve elbowed our way in and grabbed a seat at the table. Now it’s time to elevate our collective game and make original web series more vital and more valuable than ever. Producers spend a ton of time thinking about their stories, characters, lighting, host reads, and dozens of other things. But not enough time is spent thinking about who their show is for and how well they are speaking to their intended audiences. In other words, it’s essential producers make branding a priority.

At Blip, we’re practicing what we preach. One thing we’re doing to help elevate our brand is thinking about what we represent (or don’t) in the marketplace. Back in May, we launched a new destination site and tagline that clearly establishes our mission: to be the place to discover the best in original web series. Yesterday, we debuted a new logo designed by Chermayeff & Geismar, the talented team who created logos for NBC, Showtime, PBS, and other big media companies. One of our goals for 2012 is to make the Blip brand much more meaningful and visible to audiences interested in original web series. This will make the shows on our platform even more valuable to advertisers so that we can continue to increase rates, which in turn helps producers earn more revenue. Producers can then re-invest that revenue to make more and better content, and the cycle of lifting our industry continues.

There’s something really interesting going on with online video viewers, too. For example, a study we recently commissioned showed that peak viewing time for the Blip audience (which is now in excess of 300 million views per month), is during prime time hours, compared to a peak during lunch time hours only two years ago. And of those viewers, most are watching a combination of TV and online video, not strictly one or the other.

This tells us that the audience is treating online video as a genuine emerging alternative to traditional media when it comes to their sources of entertainment. This is a very exciting trend! We’re really getting to know who our audience is, and what we need to do to speak to them more effectively. Distinguishing Blip shows from television is important to our audience, hence, the company is now simply, Blip.

Producers have the same ability to get direct feedback from their audience and act on it to improve their shows’ brands. More and more viewers are finding online shows that speak to their interests, and sharing those shows with their friends. This is because original shows are getting better and producers are getting smarter by targeting niche audiences large enough to support a show, but narrow enough to be overlooked by broadcast and cable networks. Incidentally, that’s the secret of making your show a success. Give viewers something they can’t get anywhere else. If you’re a producer, tattoo that behind your eyelids. Here it is one more time. Give viewers something they can’t get anywhere else.

If the efforts of YouTube, Netflix, Blip, Yahoo, AOL, and others are any evidence, this is a great time to invest in original content and to think about what makes your offering meaningful to your audience. Advertisers are awakening to the power of these shows and the unique connection they have with their viewers. The evidence is in the significant increase in the size and length of media buys and integrations that happened on platforms like Blip and others in 2011. We view all of this activity as validation of the position we’ve taken for years: original web series are among the most valuable and exciting things happening in entertainment.

We all have a lot of work ahead of us to polish our brand and sharpen our focus on the people most interested in what we have to offer. I can’t wait to see what producers and shows emerge to influence the mainstream in 2012, and the surprises they will deliver to their audiences.

Steve is vice president of content for Blip, a network and distribution platform for original web series. He manages the content team located in Los Angeles and New York City and is responsible for all content, video views, and strategic relationships with companies that make original video content for the web. Over the course of his career, Steve has worked as a producer, director, technologist, and entrepreneur, co-founding a company that was responsible for one of the most innovative web series of the past several years, Epic Fu. That show won two Webby Awards, two Streamy Awards, and racked up 80 million views during its 5-year run.