Jordan Mathewson, a.k.a. Kootra, one of Machinima Network‘s Respawn Directors, just earned his crown as the latest King of the Web. 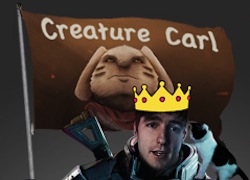 You may remember King of the Web from our last Tubefilter Meetup: Do Cheaters Never Prosper? Gaming the System In Online Video – they were our sponsor. King of the Web holds regular online competitions for fans to vote for who and what is awesome on the web.

Kootra, the latest King of the Web, is part of the Creature Hub, and is a Machinima Director as well as a Creature gamer who commentates over video games. Kootra started making machinima with Call of Duty 4 in 2008. He now specializes in live gameplay commentaries on YouTube. Some of his notable work includes the music video for The Crystal Method’s Play for Real, the Minecraft machinima Craft Spice, as well as being the cinematic designer for the Gears of War 3 unofficial trailer What Have I Become.

“It was a wild ride running for King of the Web. I entered late, but myself and the Creatures drove hard,” Kootra told Tubefilter. “All of our fans collectively came together and voted like none of us expected, it was amazing. Can’t wait till Battle Royale!”

Kootra is currently working with fellow Creatures Uberhaxornova, Gassy Mexican, Danz Newz, SSohpkc, Ze Royal Viking, and Sly Fox to launch a new business. “It will be a powerhouse for production of Live action content, as well as much of the same stuff we already do now,” Kootra told Tubefilter.