‘Pioneer One’ Revisited: You Better Be Watching This Show 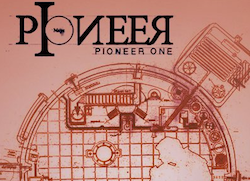 Today we’re revisiting a series that I kinda gushed over last year. Since reviewing the pilot, Pioneer One has since been able to crowdfund five more episodes for six in total, they won the drama category for 2010’s NYTVF (and should’ve won pretty much everything else. Illuminati Brothers? Greg And Donny? Really?), and their first two episodes as of January 2011 received over 1.7 million downloads. So, for the equivalent of an hour-long television pilot, they had more viewers than either of the first two season premieres of Breaking Bad.

According to their blog, it sounds like creator Josh Bernhard and director Bracey Smith are tiring of discussion over their novel distribution methods—hint: torrents are effective! I’ll skip that. Let’s talk the show itself.

Are you watching it? You should be. You should be talking about it. When people say, “there’s nothing good on the web,” or “you can’t do drama on the web,” you point them directly to this series and you say, “shut up.”

With each episode, small revelations, things that on the surface appear mundane, have major and lasting consequences. A single word near the end of Episode 4 (by this time, our running time is deep into TV Miniseries lengths) and with no shocked response, no intense musical cues, everything you thought about the series changes.

Political intrigue is shown through devil-in-the-details moments, from using old immigration agreements and laws as ammunition for forcing the Russians into backing down to simply not answering the phone until they’re damn good and ready to buy time. Humanity shown through old clips of a character begging Congress for funding to go to Mars because “it’s the next step,” and the power of simple human contact for someone who may have never felt it before.

We talk a big game about the web overtaking TV, about the creative freedom it provides. And while only a semi-full picture of its ratings are known for the first two episodes, less than 1,500 people have watched Pioneer One‘s fourth episode on YouTube, released on October 4th, 2011.

You want us to overtake TV? You want to talk about how it can provide something that TV never could or would? Viewers are gonna have to do better than that.

We’re going to have to have the balls to bring it up at the water cooler. We’re going to need to be willing to discuss it at least the way we would a Sundance film. We need to take the “just” out of “it’s just on the web.”

When someone produces something that at its core stands up against anything on any medium, we as advocates for our particular medium better step up. Not just for a pilot. But continuous. I’m not going to lie — that Pioneer One‘s producers are unable to make this their full time, somewhat lucrative job pisses me off.

Doubly so because I’m partly to blame. I forgot about them. I talked it up but I didn’t champion it. It was only through dumb luck talking with Marc a week or two ago that I was reminded about the series. They’ve made it on the summer issue of Moviemaker Magazine. They won best drama pilot in 2010 for NYTVF. I gave it a full on, no-strings-attached win review. What more do you want, a cookie for watching? Fine, I’ll start baking.

We want great dramas on the web, ones that are independently made and don’t sink to the lowest common denominator? We only need to get up off our asses and watch and talk about the ones that’re already here to those who don’t necessarily watch series on the web. It’s entirely that simple.