Tubefilter is proud to sponsor Top 10 in Digital Comedy, a panel at Digital Hollywood featuring leaders in online comedy. 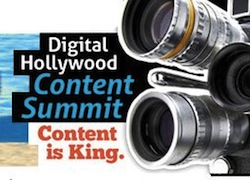 Top 10 in Digital Comedy is moderated by Amber J. Lawson, the “Comedy Impressaria Extraordinaire,” as a part of Digital Hollywood’s Los Angeles Content Summit. The panel is a part of Monday’s Digital Comedy Summit, which includes Women In (Digital) Comedy: The Funnier Sex?  and How To Turn Your Funny Idea Into A Web Series, as well as a Writers Boot Camp breakfast with Kevin Pollack and Transforming the World Through Comedy kickoff event.

We had a chance to peek at Lawson’s Top 10 Picks, and—spoiler alert—the clear winners are women and podcasts. Other nods go to entertainers from late night, branded entertainment, Comedy Central, Funny Or Die, Hulu, and the new bred of digital management agencies. Get the full list at the panel.