MakerBot TV Takes You Inside the Thingiverse, 3D Printing 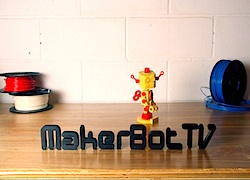 Whether or not the future revolution will be televised, MakerBot Industries hopes you’re watching it on some kind of a device of your design printed on your desktop by way of your 3D printer with a steady supply of acrylonitrile butadiene styrene (ABS), high-density polyethylene (HDPE), polylactic acid (PLA), and polyvinyl alcohol (PVA) in the comfortable confines of your home.

The company founded by esteemed Colbert Report guest and maker extraordinaire Bre Pettis along with Zach ‘Hoeken’ Smith and Adam Mayer recently closed a $10 million round of funding in order to “grow the MakerBot team to democratize manufacturing and make 3D printing more accessible to everyone!” One of the first steps in making that vision a reality is to better market the magic of MakerBoting to the online and connected masses. And one of the first steps of doing that marketing is to make a web series.

The MakerBot founders tapped perennial online video guru and the proud owner of a domain name that’s the same as his first name Eddie Codel to co-produce an original web series to show off all the wonderful stuff you can do with a MakerBot Thing-O-Matic. MakerBot TV features exceptionally cool creations from the Thingiverse and highlights the burgeoning community of 3D printing enthusiasts.

I caught up with Codel over e-mail to ask him about the program and at what time in the near future it will be safe to expect your average early adopters to own a 3D printer.

Tubefilter: Is MakerBot TV for current or future MakerBoters?
Eddie Codel: MakerBot TV is for both. The idea is to highlight all the awesome things people are doing with their MakerBots, which should excite current and future MakeBbotters alike. One reoccurring segment, Tips & Tricks, is squarely directed at current Makerbot owners to help them get the most our of their ‘bots.

TF: How many episodes will you produce?
EC: We are planning 12 to 14 episodes for the first season. At the end of season 1, we’ll refresh content segments and branding depending on what works, what people like, what we’ve missed and the growth of the 3D printing space.

TF: How’d you find your host, Annelise Jeske?
EC: We found Annelise through a fairly exhaustive search for the perfect Video Superstar. We interviewed, screen tested, production tested and brought back several strong candidates over a month long process. When I met Annelise, I knew immediately we had found the perfect person. It has been amazing working with her.

TF: How many MakerBot Thing-O-Matics were used in the filming of this web series?
EC: Great question! MakerBot has about 15 bots active in the bot farm where most of production took place. Most things you see in the debut episode came from these machines.

TF: Where do you film?
EC: The majority of the shooting for the first episode took place in MakerBot’s Brooklyn workshop space aka the “bot farm.” In future episodes, you’ll see many featured story ideas from the road, at events and other places where MakerBots live.

TF: Do you have a Thing-O-Matic? If not, when will early adopters like you most definitely own one?
EC: Not yet, but it’s just a matter of time. I just need some desk space. MakerBot has come a long way since the first prototype that Bre, Zack and Adam built 2.5 years ago. With over 5500 units shipped, a growing staff and new funding, the future for affordable desktop manufacturing is quite bright!

Start creating your own 3D thingies today, check out the thingies others have made, and watch MakerBot’s original web series all at MakerBot.com.