‘RCVR’ Premieres on Machinima, Online Drama Is Getting Good Now 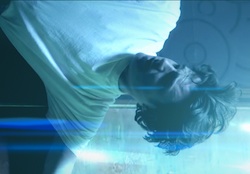 Fits and starts, that’s where much of the past five-plus years of online dramas and sci-fi series have been stuck. Some notable and pushing things forward, while many dragged the medium sideways with only comedy getting mainstream praise. But it’s fall of 2011, and there are signs the good stuff is finally here. RCVR debuted today from Machinima, as one of its largest and most ambitious new original series to date.

Not only is it a sci-fi drama, a genre well underserved on YouTube, it’s a period piece set in 1973 rural Arkansas. There’s a definite X-Files vibe here, with the story centering around a covert organization, led by Luke Weber (Daniel Bonjour), investigating extraterrestrial encounters, or, specifically a set of RCVRs who’s bodies are vessels of alien communications.

David Van Eyssen created and directed the series, someone online viewers may remember as the producer of Paramount’s thriller series Circle of Eight back in 2009. Van Eyssen’s plans extend well beyond the six episodes slated for weekly release every Wednesday, with some transmedia elements on various semi-secret websites, starting with its own: projectrcvr.com.

“Our goal was to rethink storytelling as a narrative one-way street, inviting users to explore, discover and share much as they would in a game – or social network,” said Van Eyssen. “We’re grateful to have found like-minded partners in both Machinima and Motorola, companies that understand how deeply technology affects our lives.”

The production value is visually noticeable right off the bat, and it’s clear there was some significant backing put into this one. Motorla Mobility, now owned by Google, is the show’s sole sponsor. Heck even Variety liked it—hint, that’s a rarity for them with online original series.

While Machinima is rpadily emerging as a premium content netowrk after stunning (and popular with its viewers) serials like Mortal Kombat: Legacy and Bite Me What this signals is a shift in perception by mainstream audiences that the web is nothing but awash in entertaining amateurism. And we haven’t even seen the fruits of YouTube’s Robert Kyncl and his team’s $100 million in checks to fund original content yet.

My friends, we’re in for a feast of new programming this next 12 months, and all signs point to it getting very watchable.