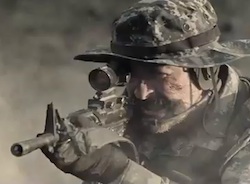 Modern Warfare fans having fun at this past weekend’s Call of Duty XP event got an extra perk when publisher Activision revealed new kick-ass web content during a panel presentation. Titled Find Makarov: Operation Kingfish, the film is hyper violent action fest that bridges the plots of Modern Warfare & Modern Warfare 2. Featuring characters and elements from the blockbuster action games, the short produced by digital agency We Can Pretend and the visual effects company The Junction, is another video game inspired short film and in my opinion, by far the best yet. (see below)

Call of Duty fans have been itching to reload on content ever since Modern Warfare 2 sold than 4.5 million copies and generated 300 million dollars in sales in it’s first 24 hours back in 2009. Itching for sequel news, the fans latched onto a website in February 2011 featuring a mysterious countdown, the title of the website: Find Makarov. For those who aren’t versed in the murky Tom Clancy on steroids plot intricacies of Modern Warfare “Vladamir Makarov” is the big bad guy of the series and a website bearing his name and featuring MW2’s fonts and color schemes could only mean one thing: Activision was about to reveal MW 3.

Yet this was not the case, Activision said they had nothing to do with the video, even announcing it as a hoax. Fans were stumped, conspiracy theories regarding the Battlefield 3 / MW3 showdown began to take hold.

Finally all was revealed when the countdown hit zero and the first Find Makarov video was revealed. With a first person point of view that seems inspired by YouTube FX wunderkind Freddie Wong the short explodes with the essential aspects of the Call of Duty Arsenal: slow motion head shots (lots of them!), familiar gray landscapes filled with fire and death, and killer sound effects. Not satisfied with the buzz and views (over 8 million to date) the creators wanted to go bigger.

With the view count as ammo, producer David Fradkin of We Can Pretend called Activision to propose a sequel titled “Operation Kingfish.” In an interview with video game news outlet Joystiq, Fradkin details Activision’s initial response:

With Activision fully endorsing the team (and financing the project) the final video is yet another reminder of what used to cost millions can now be made on computers in half the time and budget (“Kingfish” took two months from start to finish). The basic plot follows a doomed mission in the Ukraine and stars MW franchise characters such as John Price and Soap MacTavish. Director Jeff Chan wisely focuses on the action: it’s bloody, explosive, and full of easter eggs for all the Modern Warfare fans.

There are no updates if this is going to be a continuing series, but at E3 this year Activision announced plans for “top Hollywood talent” to create content for their subscription service Call of Duty Elite and so far production companies Scott Free and DumbDumb are the only names annouced. With “Operation Kingfish” being the first piece of content released by game studio, they are locked and loaded to go on quite a kill-steak of high quality digital content. Gamers and action film fans should be prepared.

Tim Goessling is a contributing writer for Tubefilter and has never hit prestige level in Modern Warfare 2. You can read more of his writing at thislalife.com