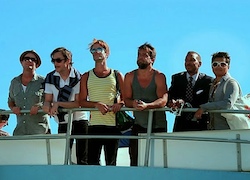 If you haven’t seen or heard of it, Half-Share, a show about six gay men vacationing on Fire Island, is hilarious. But as Edge Media editor Steve Weinstein noted, it may be “the funniest sitcom you’ll never see on TV.”

Despite praise from audiences at festivals and screenings, Half-Share, like most pilots, remains unsold. At a panel Weinstein organized at New York’s LGBT Community Center, creator Sean Hanley, Here Media’s Josh Rosenzweig, Logo TV’s Christopher Willey and US Weekly’s Bradley Jacobs, got together to discuss why gay cable networks in particular are having a difficult time with scripted content, despite seeming demand.

“Don’t you think a gay network needs a signature show?” asked Hanley, referring to the rise of nondescript reality television on cable.

But both agreed scripted content is a hard sell for the niche networks right now, mostly based on cost. Rosenberg noted Half-Share’s location and shooting time – in the summer on the tightly controlled and expensive Fire Island. Willey noted how Logo has moved away from community-focused news and toward the “light, fluffy melodrama” of the The A-List based on ratings. For the cost of one scripted show, Logo could make four equally popular reality series more broadly marketable than the East Coast-centered sitcom.

“We’re actually following the flow of what consumers really want,” Willey said. “At the end of the day…we’re trying to be an entertainment brand. We’re not a reflection of the gay community.”

Basic cable might not be the right place for an edgy show like Half-Share, he said. The show features jokes about stealing enemas and snorting cocaine.

“We hack out all the fun stuff,” Willey said of some of the more risqué programs and movies the ad-supported network has syndicated. “We’d have to really yank the teeth out of a project like this.”

Despite standouts like AMC and FX, many cable networks cannot afford to take too many risks, and pricey scripted content limits what networks can distribute overall. “We’re more likely to find a hit with ten shows than one,” Willey said.

US Weekly senior editor Bradley Jacobs lamented Half-Share’s fate, especially after viewing the many “defanged” upcoming network pilots, like ABC’s much-loathed Work It. But he encouraged Hanley to pursue a web-based strategy, citing the relative success of soap In Between Men. “Its best hope is to be a web series,” Jacobs said.

While some high concept web video has been developed for television, from Web Therapy, Rhett & Link: Commercial Kings and Workaholics, making the jump is just as unlikely as getting a show on-air through the traditional piloting process.

Still, some cable networks are trying to find value in series edgier than on-air programs, most notably BET, which has already greenlit drama Asylum for a second season and picked other high-concept projects like Al Thompson’s black-led sci-fi thriller, Odessa.

For creators, the yet-unfinished saga of Half-Share demonstrates how traditional TV is likely out-of-reach, even if you hit your niche, and if that’s your goal, accounting for cost and marketability before production starts is key. As he explores ways to extend Half-Share‘s life, Hanley is proud of what he and his cast and crew accomplished.

“I just think a lot of gay people laughed at this,” he said, referring to his show’s uncensored portrayal of gay culture. “I don’t get to do that a lot.”