Video is about as hot a space as it comes right now. After more than a decade of fits and starts of the evolution of video on the internet, from painfully choppy clips in the pre-YouTube days, to the shaky first uploads, to the rise of mega channels, video on the internet has come a long way. And what’s set apart the real stars from the chaff is social. Video blossoms in our social graphs.

The latest nut to crack, is synchronous social video. So when Brian Norgard, Dan Gould and their crack team of coders were deep in the hourly iterations on their budding real-time conversation site Namesake, they noticed something happening around video. Big appointment viewing events, like President Obama’s live-streamed townhall with Mark Zuckerberg at Facebook HQ back in April, sparked a fury of synchronous conversation all around the event.

That moment spurred the team into a rapid stealth development of a site dedicated to watching videos with friends, all at the same time. Today the cover is coming off on their project, Chill.com, as it is quietly launching giving beta users a first look at their playful lounges for video sharing and conversation.

“What happened next changed how we viewed the world,” wrote Norgard on the Chill blog today. “On Namesake, there were hundreds of our users sharing interesting conversation around the event as they watched it together. We realized that video—much like images and text—with a dash of alchemy can be made into a social experience.” 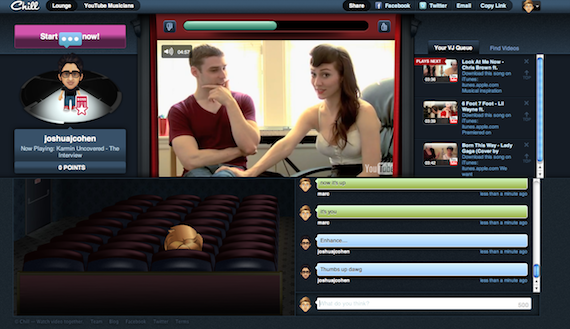 The site is in its first iteration, and pretty much defines the idea of launching with a minimum viable product (MVP). Users join with a simple login through Facebook and are instantly taken to a lobby full of “lounges” with various topics from classic MTV videos to Viral Hits to the best of Michael Jackson.

My first impression is much the same as my first time playing around with the new Google Hangouts within Google Plus—where at Tubefilter we instantly started using it to watch and discuss YouTube videos together and help decide what to cover that day. But this is like Google Hangouts Pro, custom made for the online video junkies like us (and our readers) self-admit to being.

Once in a lounge, you can search YouTube or Vimeo (more sites are said to be coming soon) for any video and add it to your personal VJ queue. From there, you can join the VJ stage and start programming what others in the room will see once your turn comes up. The room can then give your choice props or nots, meaning you better pick something fresh. The game elements are just starting to creep into play, as you earn points for the props you receive. A follow feature, one of the more effective methods of stickiness on new social sites is said to be coming soon. 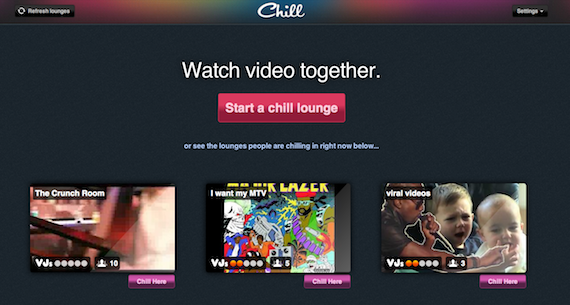 Social video playlists are certainly nothing new in the video space, with startups like VHX.tv using the concept of friend-curation to drive what we watch. But it’s the synchronous viewing and chat experience, not an easy feat to nail, that is the real draw here. Live streaming feeds are also going to be added, though those already tend to have richer social modules in place on hubs like Ustream, Justin.tv and Stickam.

So what is Chill? Chill is a place for people to watch video together. We’ve been saying all along, “everything is better with friends,” and this applies to watching video. And the thing is, you already know this to be true. How many times have you swiveled your laptop around to show friends or colleagues a funny clip on YouTube? Or emailed a video clip to a sibling or friend across the country just to put a smile on their face? It happens every day. This is exactly the analog behavior we’re attempting to mimic on Chill.

Want in to Chill? Just head to Chill.com and if one of your friends is already a user, you’re all set. Hint, if you’re my friend on Facebook, you should be fine. 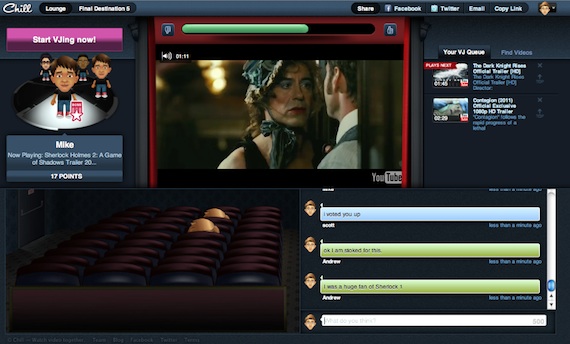