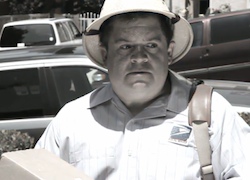 The uber-short-form is the genre of online entertainment of which I might be most fond.

The format is sustainable, too. Big (and even smallish) budget web series with a 10 or 12-episode story arc and a beginning, middle and end can oftentimes start and finish before audiences even discover they exist. But the uber-short-form can stretch those same production dollars and work hours into tens, if not hundreds of installments.

All that’s why I’m in like with 5-Second Films. The online destination for uber-short-form entertainment was created by Brian “Boss Man” Firenzi in 2005, “after being disappointed by so man 5,400-second films.” All films on the site must abide by 5-Second Films’ Rules. There must be 2 seconds of beginning titles, 5 seconds of film, 1 second of end titles. The Boss Man along with a handful of talented friends and few cameo filmmakers have so far created and uploaded 694 films abiding by those rules. And counting. A brand new 5-Second film debuts on the site every weekday.

The recent submissions by comedian Patton Oswalt are great (Crabwalkin’!) and fit perfectly with the one-punchline-and-done, simple and random irreverence of 5-Second Film’s in-house troupe, who believe no idea is too bold, no premise too awkward, no situation too strange, no interaction too mundane. The opportunity costs for five seconds worth of film are such that the filmmakers have just enough time to try anything. And oftentimes, that anything works.

Spend a couple minutes on 5SecondFilms.com, watch 40 or 60 of Firenzi and company’s films, and you’ll see what I mean.