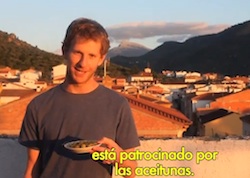 On one hand this is a travel web series, showing us glimpses of daily life in a pristine little part of Spain we may never wander into. But on the other hand, Pueblo is something different, straddling the line between scripted comedy and travel doc with a backdrop in reality. Through it we’re given a comical peek into the very real world of rural Andalucia, Spain. That, while teaching us Statesiders a little much-needed Spanish.

Eve Richer and Ben Raznick are world travelers, with stints living and travelling in Nicaragua, Argentina, Brazil, and Spain, far from their cozy hometown of Boulder, Colorado. When the pair were accepted into a grant program to teach English backed by Spain’s Ministry of Education, the two friends (and writers) decided to import a the American web series format into sleepy La Puerta de Segura where olive picking is the town’s main occupation.

Now six episodes into their release of Pueblo, which began last month on YouTube, the improvised comedy is unfolding with Raznick’s quirky adventures feeling all together too real making this series refreshingly original. He is after all actually a quirky American trying to adjust to the slow-paced Spanish life of siestas and Tapas while trying to meet girls and make friends. Really this is closer to an indie version of MTV’s The City without the fashion.

Using the power of the internet, we caught up with the ex-pat creators from their home in Andalucia to find out what prompted them to tackle a web series and find out a little more about the Spanish take on the boom in online video.

Tubefilter: What inspired you guys to make this series?

Eve Richer: Last year Ben and I applied to work in Spain through a government teaching program. During that same time we’d been working on a screenplay together based on previous experiences abroad. It was something we were just doing for fun on the side, emailing scenes back and forth, but I think it’s what initially inspired us to try and film something together. Eventually we were accepted into the teaching program and found out we’d be in the same town, and then the idea for Pueblo developed while we were on a road trip together last summer. We’d never really done anything like it before but we had fun making the series and learned a lot.

Tubefilter: You guys are travelers of the world, but you’ve created something that’s cooler than 5-min breezy clips of a city and instead shown us the local culture. Was that the intent?

Richer:Thanks! One of our goals in making the show was to share a little bit of the local culture, so I’m glad that comes across. Personally I was very curious about what the town would be like before I arrived. I figured if I was interested maybe other people would be too. So our intention was to highlight some interesting aspects of the region through the eyes of a foreigner, and hopefully do so in an entertaining way. 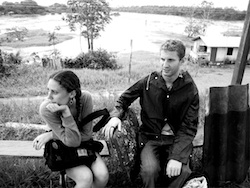 Tubefilter: What made you decide to script the series as opposed to say a video blog format?

Richer:Well the dialogues and interviews were improvised so technically the series wasn’t scripted. We did plan out a general story arc for the show and we kept a list of all the scenes we wanted, but things shifted around a lot and we’d constantly come up with new ideas, even in the editing room.

But in terms of why we didn’t do a video blog, I’d say that from pretty early on we knew we wanted to mix fiction and documentary. We thought it would add a unique flavor to the show, and from a practical perspective, it was the best way to incorporate all of our story ideas. For example, Ben’s main love interest is played by a mannequin head, so scenes with her required some advance planning to get the right movements and camera angles. But we also wanted to capture certain live events as they happened (like the town festival), so in those cases I would film things in real time. Then in the end we used interviews with Ben to tie it all together.

Tubefilter: Do you find online video watching is as big in Spain as it is over here in the States?

Eve Richer:I don’t think so, at least not to the extent it is in the US. Of course Spain has YouTube and viral videos just like us, but in our town the idea of filming a web series was a pretty foreign concept. In the bigger cities it may be different though.

Tubefilter: So what are they watching over there?

Richer:In terms of web shows I don’t really know. I’ve heard of one series called Malviviendo which seems to have built an audience. Other than that I’m not sure since most of my interactions with Spanish people were offline. That said, with the decreasing cost of technology today I imagine that the viewing and creating of online videos will continue to increase in Spain just like it is in the US.

Tubefilter: How have your Spanish students reacted to the series so far?

Richer: Back in May we did a Pueblo screening in our town and we had an amazing turnout, partly thanks to all of Ben’s high school students that showed up. Based on audience reactions and the feedback we got afterwards, I think the students really enjoyed the show. They especially seemed to like the classroom scenes since they got to watch themselves, friends, and other teachers up on the screen.