MTV’s ‘Teen Wolf’ Gets a Web Series with AT&T 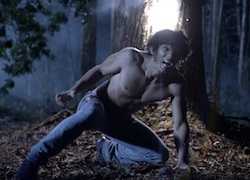 The first season of MTV’s dramafied Teen Wolf reboot has so far scored a 61 on the Metacritic scale. That and an average weekly viewership fluctuating between 1.675 million and 2.167 million pairs of eyeballs may or may not be enough to guarantee the program a second season, but it did guarantee an original web series.

The online mini-series is dubbed Search for the Cure, is written and directed by creator Jeff Davis (who also created Criminal Minds), stars Posey alongside Dylan O’Brien and his real-life father John Posey, is produced by MEC and Generate Studios (a company that is very familiar with the web series world), and is pretty good.

Yes, Posey and O’Brien’s characters watch online videos on their new AT&T hotness by Samsung from awkward angles because AT&T is the series’ lead sponsor, but that kind of product placement is a small price to pay for two to three-minutes of quality entertainment about mythological creatures, especially since True Blood jumped whatever is Charlaine Harris’ ridiculous Bon Temps equivalent of a shark a long time ago.

You can catch the first two episodes of Teen Wolf: Search for a Cure today on AT&T’s Facebook page where they will live exclusively for a 24-hour period before being distributed to ATT’s U-Verse and MTV.com. New episodes will be released every Monday with the same distribution windows.