Between Two Ferns with Zach Galifianakis: Will Ferrell Finally Shows Up 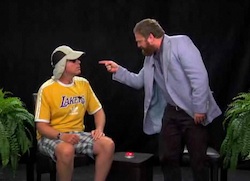 Zach Galifianakis has tangoed with a dozen A-listers over the past few years—Sean Penn, Bruce Willis, Jennifer Aniston, Jimmy Kimmel, Michael Cera, Jon Hamm, Natalie Portman, Charlize Theron, Bradley Cooper and of course Steve Carrell. But one name was oddly missing: Will Ferrell. The series after all is Funny or Die’s most popular web series to date, getting generous front page placement and multiple sponsorship deals at this point. So it seemed strange that Ferrell wouldn’t grace his comedic ‘nephew’ with a pop in.

Finally the Ferrell-snubbing is over as today he goes tete-a-tete with the Streamy-winning comedian in the 13th installment of Between Two Ferns with Zach Galifianakis (below). Ferrell classes it up, donning some homer love for the Lakers in a throwback Adidas shirt with a sunshield fishing cap. While mostly civil, the interview inevitably implodes when comments of Galifianakis’ sensitive weight issues creep back in. Oh, and Jon Hamm stops by (again).

What started as a side project for Galifianakis, something of a workshop for his offbeat non sequitur act while his film career was just starting to heat up, is now the comedy network’s A-listing breadwinner. Speed Stick jumped on board for an exclusive sponsorship, complete with wrap-around display ads and generous product integration. The deal is rumored to be in the low sig-figure range according to sources. 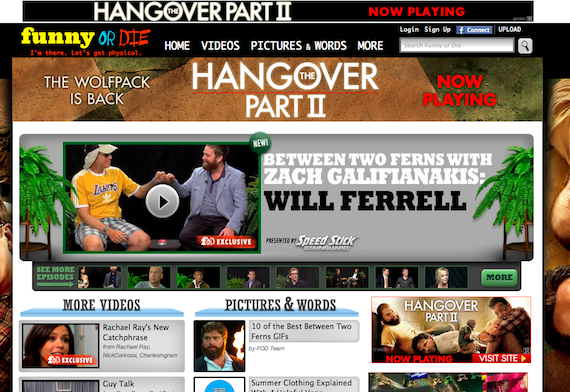 And then there’s Zach’s big budget comedies. Movie marketers have often turned to web video to spend those 8-figure P/A budgets, and Warner Bros. is spending heavily on Funny or Die with site takeovers this weekend for the Galifianakis-led The Hangover Part II. So far so good for Warner, as the film already netted $10.4 million in last night’s midnight screenings on track to take home the holiday weekend with estimates of $125 million and $160 million by Monday, making it a record-breaking figure for an R-rated comedy.

As for Funny or Die, they may have stumbled upon a new model for branded celebrity web series—casting stars of studio comedies in ongoing original series then turning around and selling those studios to hock their films. Rifling with Ryan Reynolds?