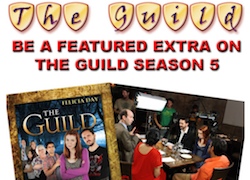 Felicia Day is bringing back her hit online web series – about what happens when a crew of hardcore gamers drop the virtual and meet one another in reality – for the Summer of 2011. The Fifth Season of The Guild will debut on longtime distribution partner MSN, is sponsored by longtime supporters Sprint and Microsoft, and will feature a first-time cameo from one lucky fan with a soft spot for the arts and cash to donate.

Day and company are auctioning off a guest spot as an extra in an episode in Season 5 of The Guild. “The winner will be called out by name by a major cast member and featured in likeness,” Day told me over e-mail, “So it’s a lovely cameo opportunity.”

Interested individuals bidding on this background acting gig can also feel great about where their money is going. 100% of the proceeds will be benefit The Mr. Holland’s Opus Foundation, an organization that donates “both new and refurbished instruments to school and after-school music programs that lack the resources to keep up with equipment loss due to attrition, depreciation and wear over time, and to accommodate students on waiting lists or who have to share instruments.”

“I used to volunteer for that charity because I was a classical musician before becoming an actor,” Day explained. “We wanted to do something this season and we had a featured role come up that was a perfect opportunity.”

The auction’s received 50 bids(!) so far and is up to $1,625(!) with still a day left to go. Guild fans with a disposable income who want to put musical instruments into children’s hands should get their bids in soon.