Brent Spiner: From Star Trek’s Data to a ‘Fresh Hell’ 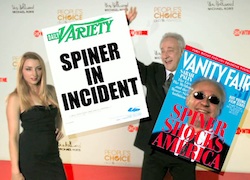 There is a certain fascination with watching stars crash to Earth. (See any article on TMZ for reference.) The new web series, Fresh Hell from Star Trek: The Next Generation star Brent Spiner, takes a comedic look at the aftermath of a celebrity’s fall from grace.

“Despite her day job, Dakota has a heart of gold and a strong (yet strange) moral compass,” says Steel. “Her bond with Brent is that they are both lost, vulnerable, and need someone in their lives who genuinely care about them.” Clearly, Dakota offers Spiner something that he is lacking. Actually, she was about to offer him something else he had been missing, but he quickly stopped her. In fact, during the course of the second episode, Spiner reluctantly shifts from opportunistic lothario to dutiful mentor and essentially conducts a master acting class within the span of a few minutes.

The series obviously begs the question, how much of the real Brent Spiner is infused in the fictional alter ego? Those who read his tweets know that he has a sardonic wit and is often quick to retort to those who give him grief on Twitter. Reports from fan encounters are mixed, ranging from lauding his humor to calling him a jerk. A few years ago he appeared on the Friends spinoff Joey as himself where he apparently told the writers to write him as a jerk because as he jokingly said, “I am one.” As for Kat Steel, she simply states that, “[w]orking with Brent Spiner was a dream! He’s professional, kind, witty, and talented.”

What is never in doubt is Spiner’s comedic sensibility. Long before portraying a certain android on Television, Spiner was best known for a series of scene stealing appearances on Night Court. Also, as Star Trek fans are well aware, he skillfully managed to infuse a good deal of humor into the emotionless Lt. Commander Data during its seven seasons on the air. Fresh Hell, which Spiner co-created with Christopher Ellis and Harry Hannigan, should afford him ample opportunity to display his comedy prowess.

The first two episodes are already available on YouTube, with the third episode scheduled to launch later today.