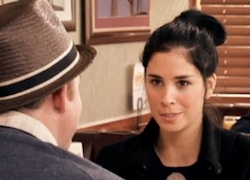 It’s produced by DumbDumb (Will Arnett and Jason Bateman’s branded production company) and Electus (Ben Silverman’s “next generation studio”). It stars David Koechner (who you’ll recognize from Anchor Man, Reno 911, Talladega Nights, and a few dozen other television and film appearances), who engages in conversation with a rotating cast of comedians (including Bateman and Sarah Silverman) over a Grand Slam inside an actual Denny’s.

The series is a solid addition to the long line of online talk shows from comedians. It’s funny, irreverent, and unexpected. But the best part about Always Open is it works.

Denny’s has seen a “marked increase in awareness among 18 to 34 year-olds” since the launch of the web series. Those statistics come courtesy of YouGov’s BrandIndex, “a daily measure of brand perception among the public, tracking many brands across multiple sectors simultaneously.”

Steve Hall at Adrants breaks down the numbers:

Since the show’s premiere at the beginning of the month Denny’s has seen its Impression score rise from 6.2 to 25.4 – a number that has surpassed the score for the 50+ demo.

YouGov’s BrandIndex measurement scores range from 100 to -100 and are compiled by subtracting negative feedback from positive. A zero score means equal positive and negative feedback. Denny’s was measured using the research company’s Impression score, which asks respondents: “Do you have a general positive feeling about the brand?”

In terms of methodology, YouGov BrandIndex interviews 5,000 people each weekday from a representative US population sample, more than 1.2 million interviews per year. Respondents are drawn from an online panel of more than 1.5MM individuals. Margin of error is +/- 2%.

So, Always Open is entertaining online content with beneficial real world implications for the brand. Impressive, right? And something the good people at DumbDumb and Electus and everyone in the web series world can be happy about while celebrating this year’s Baconalia.