A send-up of obsessive food culture, Foodies pits everyman Porter (Sean Hankinson) against his fiancee Moose’s overbearing, hipster friends, who gather each week to eat snooty food together, largely so they can go home and blog about it later. A show about a group of pretentious jerks who meet weekly to fawn over exotic recipes sounds promising, but based on the pilot, I’m not sure I have any desire to spend more time in this world.

This show is, to but it bluntly, filled with hate, and to be honest, I found it off-putting. Porter hates these ludicrous hipsters and doesn’t want to be there. The hipsters hate Porter because he’s an uncultured swine. And there you have it. There’s nothing redemptive about it, and it just starts to feel mean-spirited. 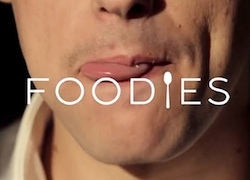 It seems like having Moose in the series – the go-between, who is friends with all these people – would balance things out and make everyone more sympathetic. But she’s oddly absent. (She’s in future episodes…why not this one?)

In the end, there’s sort of a speech about how everyone eats and food should be delicious and it’s almost preachy. Is anyone really THAT UPSET that some hipsters get together and eat fancy food? I think a lot of people are guilty of this at times – I’ve certainly gone on at length about the maple sausage gravy from Animal. The point is, they’re not hurting anyone. It’s a good target for comedy, but not vitriol. This show seems genuinely angry at foodies, not celebrating them.