Before Kevin Pollak had me at “Hand me the keys you #$%^ing @#$% sucker!” he had me at his stand-up. The comedian’s comedian self-deprecating style, uncanny ability to imitate others, and spin said imitations into compelling routines is a special kind of entertainment that rarely ceases to engage. 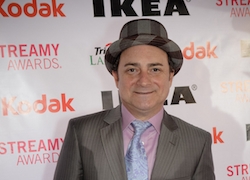 Pollak’s stand-up routine is a special kind of entertainment for Pollak, too. It’s one of two times in his professional career (which spans 50-some-odd movie roles and a handful of television appearances) where he’s had 100% creative freedom, control, and ownership of an idea.

So, when’s the other time Pollak’s conceived a project, kept the project safely guarded, and executed the project exactly per his vision instead of reluctantly handing it over to studio execs to later lament how much the whole thing got mucked up under the purview of a design-by-committee Hollywood bureaucracy? On the web.

At the Banking on Big Brands / Celebs for the Web panel at SXSW, Pollak emphasized how he loves the web for the same reason he loves his standup. He can do whatever he wants. “It wasn’t until I found this web space that I found the energy again to live and die by my own wits in front of strangers in an audience in a strange new land,” said Pollak. It’s a sentiment showcased by his work on The Writers Room, Vamped Out, and Kevin Pollak’s Chat Show and a sentiment shared by his fellow panelists, including Innovative Artists’ David Tochterman, AOL’s Amber J. Lawson, Digitas’ Paul Kontonis, and Rick Fox.

The former Los Angeles Laker said he brought his project to the web because he “was tired of waiting…I wanted to create a story and have a voice that doesn’t get caught in development.” After years of playing hurry up and wait in Hollywood, Fox’s buddy comedy about a professional athlete who’s looking for his lost mojo in the off season scored a partnership with Michael Esiner’s new media studio Vuguru and is scheduled to start shooting in April.

Celebrities discovering the web as an outlet for creative freedom and control far removed from the traditional studio system is certainly nothing new, but the involvement of those celebrities in their own online video projects has definitely grown deeper. “Initially we saw a lot of projects with celebrities attached,” said Kontonis, “but now we’re starting to see celebrity involvement. They’re accessing their social graph and actively promoting their projects to their fans.”

It’s those massive fan bases that are particularly attractive to advertisers and investors. A film star, for instance, with 20 million Facebook fans has the kind of built-in audience that puts sponsors at ease while they’re writing checks to finance productions.

The Banking on Big Brands / Celebs for the Web panel made it clear freedom and control are still the number one reasons for celebrities to define the web as their broadcast medium of choice, but not all celebrities are willing to give up big bucks for a creative vision. That’s why we haven’t seen a mass exodus from traditional media to new media. Yet.

When people like Lawson, Kontonis, and Tochterman figure out tried and true ways to monetize those humongous celebrity audiences with dollar amounts with enough zeros to make them comparable to major motion picture releases and television shows, they will come.